Thousands wake up early to watch solar eclipse in Oman 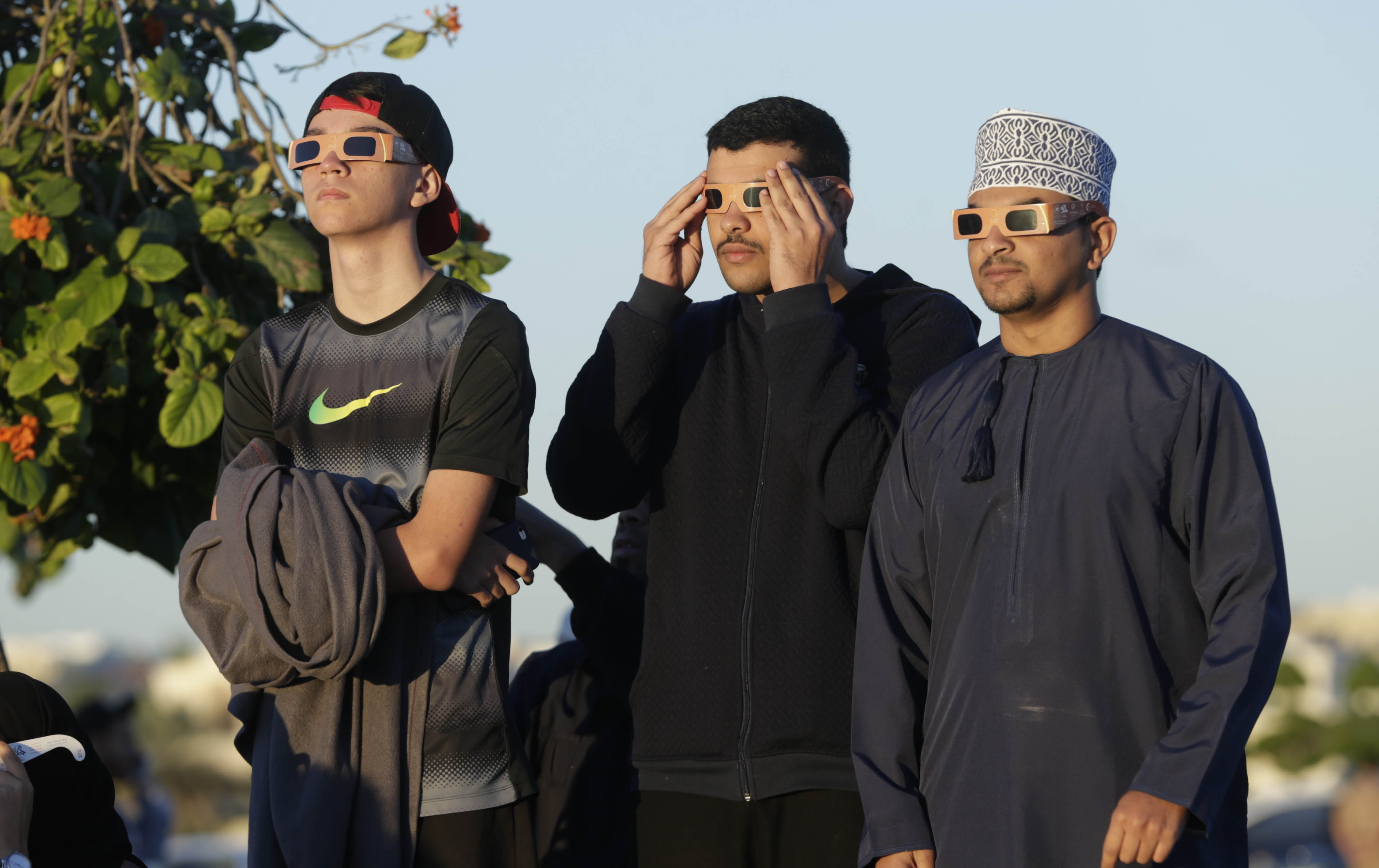 The eclipse began at about 6:30 am, and peaked at 7:39 am, and then continued until just before 9 am. So that people would be able to safely watch the eclipse, the Oman Astronomical Society had set up about 22 observation camps across the country.
“I went to the Cave restaurant to see the eclipse at 6 am, and the view was really great, the experience was lovely, and this was a great way to start the day..” said Yusuf Nasser, who went to see the eclipse in Muscat.
Another eclipse watcher, Ayman Salim, added, “I saw this annular eclipse when I went to Madinat Al Irfan with other people. I was very excited because this phenomena has so far only happened once during my entire life, and I do not know if I will get to see this again when I become older, so I am very grateful for this once-in-a-lifetime opportunity.”
In the build-up to the eclipse, the Oman Astronomical Society, the Ministry of Health, and the Ministry of Awqaf and Religious affairs had been constantly sharing information with the public to spread awareness on how to safely watch the eclipse, as neglecting to do so could have caused partial or full blindness, which could be irreversible.
22 locations had been set up all across Oman, including six in and around Muscat (Sur Al Hadid on Al Seeb Beach, Sultan Qaboos University, Innovation Park Muscat at Knowledge Oasis Muscat, the Oman Convention and Exhibition Centre, and the Omantel headquarters, both in Madinat Al Irfan).
In addition, there were sites set up in the capitals of many of the other governorates, including Nizwa, the capital of the Dakhiliyah Governorate, where the Sultan Qaboos Mosque in Nizwa was the designated viewing site, Salalah, the capital of the Dhofar, where people went to Al Dahariz Beach, Khasab, in the northern Governorate of Musandam, where viewing facilities had been setup in the Atana Khasab hotel, Ibra, where A’Sharqiyah University was the designated viewing area, Kawas Mountain in Ibri, the capital of Al Dhahirah, and Sohar, where Al Yubeel Al Fadhi Park was the assigned viewing location.
Other locations had also been set up by the Oman Astronomical Society, in collaboration with local sponsors. Al Buraimi University College, in the Governorate of Buraimi, Sayyid Hamad Al Busaidi Library in Al Mudhaibi, Atana Stay in Al Ashkara, the entrance to the Adam-Ghaba road near Adam, Haima Park, Al Rustaq Park, Sultan Qaboos Mosque in Bidbid, Masirah Island Resort, Ras Al Jinz Turtle Reserve and Al Sheikh Said Al Khalili School had all been turned into viewing sites from which people could watch the eclipse.
One of the organisations that assisted with hosting eclipse watches was The Research Council, with a spokesman saying, “The Research Council hosted a public observation for the solar eclipse in collaboration with the Oman Astronomical Society to observe the annular eclipse on December 26, 2019 at Innovation Park Muscat.
“The event aimed to promote and raise the standards of the field of astronomy in the Sultanate, promote scientific tourism in the Sultanate, raise awareness among the general public regarding the different aspects of observing the annular eclipse, encourage photographers to take photos of the phenomenon of the annular eclipse and show the beauty of Oman, and encourage researchers to conduct scientific studies and research,” the spokesman added.
“This annular eclipse is a unique phenomenon, as the last time it took place was in 1901,” explained Dr Majid Al Ruqaishi, a research associate at the Department of Physics of the College of Science at Sultan Qaboos University.
“The umbra, the dark centre portion of a shadow, was not visible in Muscat when the moon covered part of the sun during the annular eclipse.”