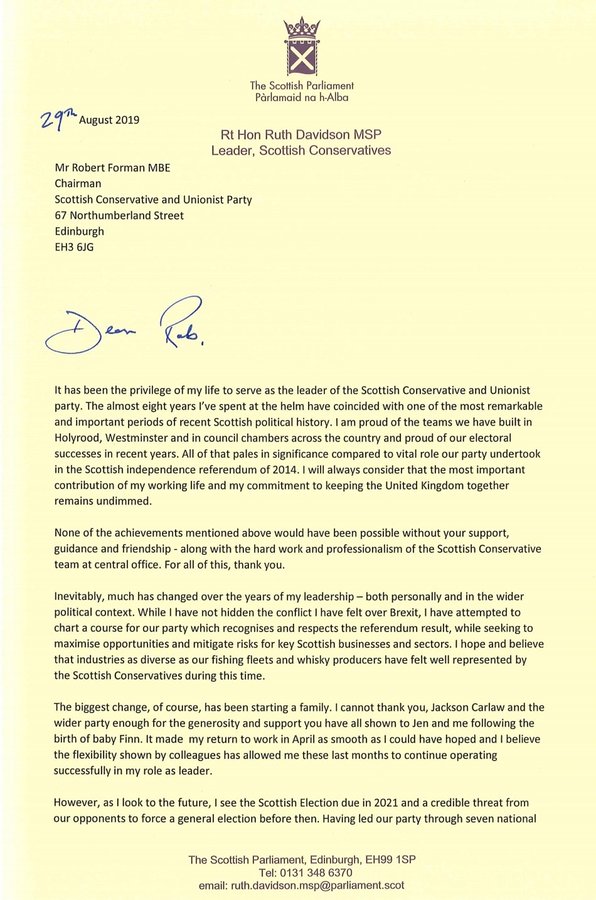 Ruth Davidson confirmed she has quit her role after eight years - just hours after Johnson announced he would shut down Parliament for a month.

Davidson, who had a baby last October with her partner, said she was quitting for family reasons - as the idea of leaving her son Finn for an election campaign "fills me with dread".

But she also felt "conflict" over her party's hardline Brexit stance - and delivered a coded slapdown to Boris Johnson by begging politicians to "unite" the country.

It came moments after former Cabinet minister Lord Young quit his government role, warning proroguing Parliament "risks undermining the fundamental role of Parliament at a critical time in our history".

Davidson told a press conference in Edinburgh: "Respect is what is missing from our debates, and without respect you cannot have understanding and you cannot unite which is what we in Scotland and in the UK need to do."

Yet Davidson was careful not to fully tear into Boris Johnson - who she said she stood fully behind in efforts to get a deal with the EU.

Instead she turned her fire on MPs in the Commons - saying they must "for God's sake" back a Brexit deal if and when it comes back to Parliament.

She said: "I went down to Downing Street last week to meet him in a private meeting. I stared him right in the eye and I asked him - 'I need to know, are you actually trying to get a deal or not?'

"He categorically assured me that he was. He believes his efforts in Biarritz [at the G7] have helped open the door."

In her resignation letter, she wrote: "Inevitably, much has changed over the years of my leadership - both personally and in the wider political context.

"While I have not hidden the conflict I have felt over Brexit, I have attempted to chart a course for our party which recognises and respects the referendum result, while seeking to maximise opportunities and mitigate risks for key Scottish businesses and sectors.

Ousted Prime Minister Theresa May, who was a close ally of Davidson, said: "Sorry to see Ruth Davidson step down as Leader of Scottish Tories.

"Thank you for all you've done for our party and our Union over the last 8 years, and enjoy your well-deserved family time with Jen and Finn.”

"I know well the toll political leadership can take on family life and no-one will grudge her more time with her young son.

"There will be opportunity later to discuss the politics of her decision - but for now, I'll simply send my best wishes."