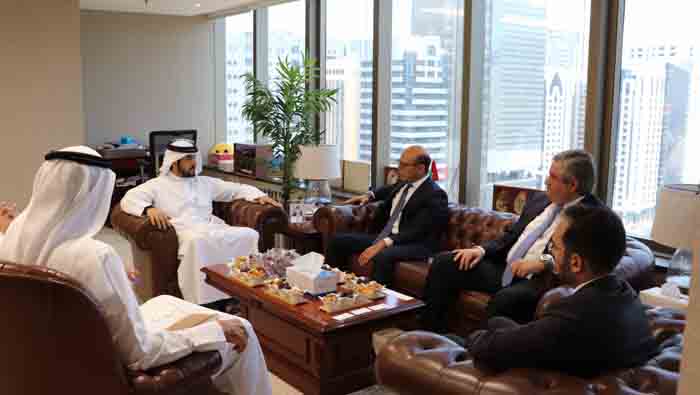 Muscat: Abu Dhabi Securities Exchange (ADX) recently met with Morgan Stanley’s Chairman & CEO Middle East and North Africa (Mena) to discuss how to develop business relations between both entities.
ADX carried out a tour to the Morgan Stanley delegation including Sammy Kayello, Chairman & CEO Mena, Gokhan Unal, Managing Director, Investment Management, and Waleed Al Rezooqi, Vice President, Investment Management. This was followed by a high-level discussion exploring opportunities between both entities.
Khalifa Salem Al Mansouri, Acting Chief Executive of ADX said, “This was a valuable introduction for ADX. Developing business relations with such a highly-experienced American multinational investment bank and financial services company as Morgan Stanley will serve to further potential cooperation to further ADX’s long-term vision. Their record speaks for itself, placed as it is within the top 10 for average six-month return from pricing on US IPOs since 2014 according to recent data from Dealogic.”
“Our meeting with Morgan Stanley will support ADX’s strategy of bolstering its leading position in the region and further expanding its cooperation with global financial markets, as well as increasing the base of partners and investors. ADX has an ongoing programme ofworking with world-class entities, in order to achieve a market of high value to investors both within the region and around the globe,” he added.
The Morgan Stanley meeting follows on from ADX’s recent commitment to carry out a strategy to diversify investment financial instruments for investors in the market, as part of "Ghadan 2021" plan. This approach is building a solid platform for investors by removing barriers and costs to doing business. In addition to making Abu Dhabi attractive to investors, the Ghadan 2021 plan aims to create jobs, spur innovation and improve the quality of life for its residents, while preparing to create a viable economy for a post-oil world.
It is worthy to note that foreign net investment in ADX increased by 373 per cent during first half 2019 in comparison to the same period in 2018 with net foreign investment climbing from AED489 million during first half 2018 to AED2.3 billion during first half 2019.
Net institutional investment during first half 2019 also recorded an increase of 110 per cent compared to the same period in 2018 with AED947 million during first half 2018 to AED1.9 billion. By end of first half 2019 the number of investors on the Exchange reached around 969,000 investors of which 8,732 are institutional investors where 6,345 of those institutions are foreign.
Morgan Stanley, a bank holding company, provides diversified financial services on a worldwide basis. The Company operates a global securities business which serves individual and institutional investors and investment banking clients. Morgan Stanley also operates a global asset management business.