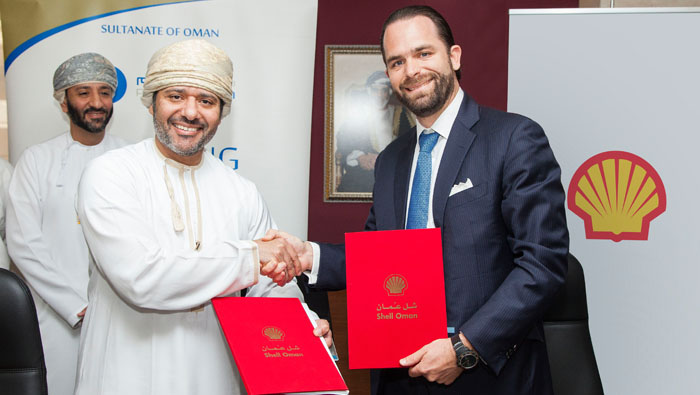 Muscat: Shell Oman Marketing Company, the leading downstream fuel marketing company in the Sultanate, signed an agreement with Port of Duqm Company (PDC) to develop fuel bunkering facilities and services.
The agreement was signed by Dr Mohammed Mahmood Al Balushi, CEO of Shell Oman, and Reggy Vermeulen, CEO of PDC. The agreement establishes a bunkering terminal to provide different grades of quality fuels and lubricants, as well as other ancillary facilities to marine liners calling at Port of Duqm.
Al Balushi stated: “The development of the marine business at the Port of Duqm will reinforce the strategic partnership between Shell Oman Marketing and PDC. Due to the strategic and geopolitical location of the port on international shipping lines, it is hoisted in the coming years to transform into a regional hub attracting large investments and projects, while driving the diversification of the Sultanate’s economy and enhancing its global competitiveness."
"We are committed to playing a crucial role in the attainment of this vision by delivering global fuel technology and operational excellence to local and international marine customers in Duqm as part of Shell’s global network,” he added.
Vermeulen said, “This new agreement with Shell Oman underlines the clear ambition of the Port of Duqm to become a future bunker hub serving the entire region. With new global bunker regulations coming into effect as of 2020, Port of Duqm plans to take full advantage of its prime location, as well as the availability of the right fuel specs and offer prime bunker services accordingly.”
Shell has a long-established reputation as a reliable partner of choice in the marine industry. Backed by decades of experience, dedicated global Shell marine experts work to offer the highest value for customers. On a global scale, Shell operates in over 130 ports around the globe, providing customers with a wide range of marine products and services. This expertise combined with state-of-the-art global technology and innovative eco-friendly practices is expected to result in the successful delivery of fuel solutions to local and international marine liners in Duqm.
PDC is a 50:50 joint venture between the Oman government and Port of Antwerp Consortium. The port has entered an early operations phase with a fully functional port and commercial quay, capable of handling heavy lift project cargo, general cargo, dry bulk and containers.
With its deep draught (18 m), lengthy quay walls and expansive basin, Port of Duqm has the accoutrements of a world class, multipurpose commercial gateway. It has a current capacity of 100,000 to 200,000 TEUs, four million tonnes of dry bulk, and one million tonnes of project, break bulk and heavy lift cargos. Being closely located to the major oil & gas and mining projects in Oman, upon completion in 2020, Port of Duqm is seeking to increase its activity level exponentially in the years to come. Port of Duqm is therefore ambitious to become a major hub for the handling of containers, RORO, project cargo, liquid & dry bulk and break-bulk cargoes.