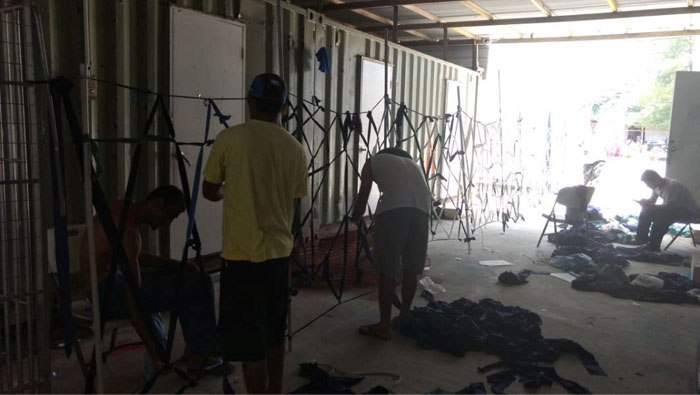 Sydney: Papua New Guinea will delay by at least 24 hours a plan to forcibly evict hundreds of men from an abandoned Australian detention centre, three asylum seekers said on Saturday.
Hundreds of men have barricaded themselves into the Manus island centre for more than 11 days without regular food or water, defying closure bids by Australia and Papua New Guinea in what the United Nations calls a "looming humanitarian crisis".
Rejecting United Nations calls to restore utilities to the camp, Papua New Guinea this week said it would "apprehend" those responsible for the stand-off when it forcibly evicted the men on Saturday.
But several asylum seekers said Papua New Guinea officials told them detainees could remain until Sunday.
"Police are talking on a microphone outside prison," Behrouz Boochani, a Kurdish journalist from Iran, who has spent more than four years detained in the camp, told Reuters.
"They're telling the refugees to leave, saying tomorrow will be the last day you are here," he said in a text message.
It was not immediately clear what caused the postponement.
Pressure on the asylum seekers, drawn largely from Afghanistan, Iran, Myanmar, Pakistan, Sri Lanka, and Syria, has grown in recent days as Papua New Guinea tries to get them to move to three transit centres.
The asylum seekers fear reprisals if they move to the transit centres, pending possible resettlement in the United States. The main camp was closed on October 31 and water and power have been cut off.
Some island-dwellers are angry at what they perceive as preferential treatment for the asylum seekers, many of them well educated, in a poor, rural society, and some detainees have come under attack when on release from the camp.
The patience of Papua New Guinea authorities has begun to wane, however, and they moved this week to remove camp fences and dismantle rainwater collection bins and makeshift shelters built to ward off the tropical sun and rain.
Under pressure, groups of men have elected to move to the transit centres. But the exact number left is difficult to ascertain, though Manus Island police commander David Yapu told the Australian Broadcasting Corporation about 400 remain.
Several of those remaining told Reuters they would not move, setting the scene for a potential clash, which would further stoke international criticism of Australia.
Australia has used the centre, and a camp on the tiny Pacific island of Nauru, to detain asylum seekers who try to reach its shores by boat.
It says boat arrivals will never enter Australia, even if found to be refugees, as this would encourage people smugglers in Asia.
Australia says the policy prevents people drowning at sea, but it has been widely condemned.
Acting Prime Minister Julie Bishop said there was no reason for the remaining men to choose to stay, rejecting criticism of inadequate facilities at the transit centres.
"Over the last few months they have traveled to East Lorengau on many occasions and never raised any concerns," Bishop told reporters in Perth.
Reuters