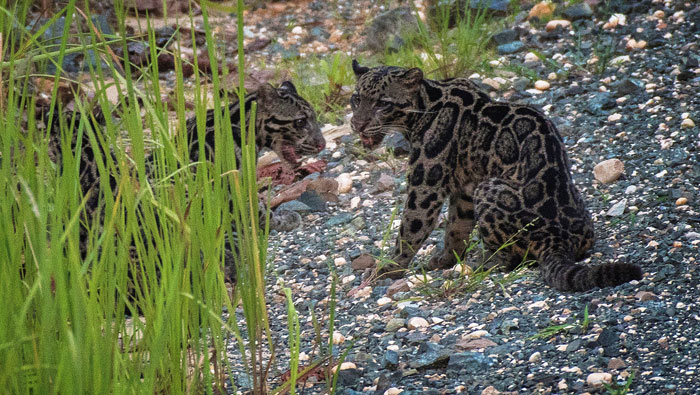 Kuala Lumpur: A Bornean clouded leopard and her two cubs were captured on camera strolling through a Malaysian forest reserve last week, a rare daytime sighting of the elusive animals in the wild.
Found only on the Southeast Asian islands of Borneo and Sumatra, the big cat species is known to zoologists as Neofelis diardi, with just 700 estimated to live in a habitat shrunk by poaching and deforestation.
"Seeing it in daytime is nearly unheard of, and never with its young," said Michael Gordon, who filmed the animals cross a road and walk into bush in Deramakot in Malaysia's Sabah state on Borneo, where camera traps first spotted the cats in 2010.
"The Sunda clouded leopard is difficult across most of its range, but the last 3 years I have been coming to Deramakot, I have seen it a quite a few times," the photographer told Reuters, using an alternative name for the species.
The animal's habitat has shrunk by a tenth each year over the last two decades, the World Wildlife Fund said, hit by poaching and deforestation for commercial purposes.
It feeds on monkeys, small deer, birds and lizards, and is the main predator on Borneo, an island shared by Malaysia, Indonesia and Brunei.
In 2007, genetic studies showed the species to be distinct from its nearest relative, the clouded leopard, or Neofelis nebulosa, which was first described scientifically by British naturalist Edward Griffith in 1821, the WWF says.
The range of the clouded leopard extends from Nepal on the Indian subcontinent to southern China and throughout South-East Asia.
The island clouded leopard has small cloud markings, a double stripe down its back and its greyer fur is darker than the mainland species, the WWF says.