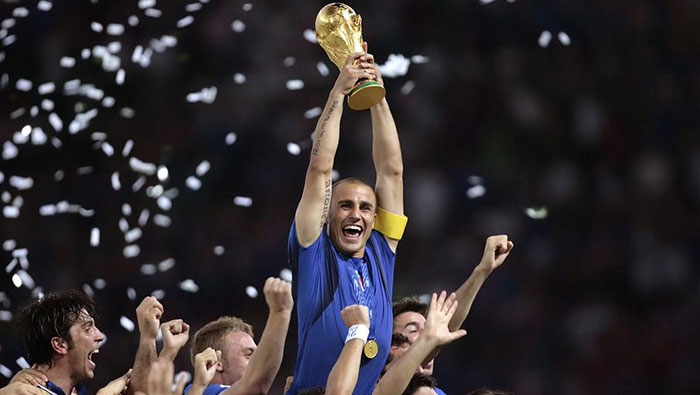 Hong Kong: Former Italian captain Fabio Cannavaro has been tasked with building an all-Chinese team that can maintain Guangzhou Evergrande's domestic dominance after being appointed their new head coach on Thursday.
The Italian was handed a five-year deal at the same club that fired him in 2015 and replaces Luiz Felipe Scolari, who left following the completion of his contract having guided Evergrande to the last three league titles and the 2015 Asian Champions League crown.
Cannavaro had a seven-month stint at Guangzhou when he took over from Marcello Lippi in late 2014, only to be fired in June the following year and replaced by Scolari.
"I'm very honoured and happy to be back here," Cannavaro said at a news conference. "Before leaving here last time I had said that I would come back one day.
"Fortunately I have gathered some very good experience in the Chinese leagues since then and I am so happy to be back," he added. "Evergrande's plan for the upcoming years excites me very much and strongly motivates me to work with club. We will need to bring as many Chinese talents through as possible while keeping winning as always."
The 44-year-old World Cup-winning defender rebuilt his coaching career with a stint at Al Nassr in Saudi Arabia before returning to China to steer Tianjin Quanjian to the second division title in 2016.
Cannavaro led Tianjin to third place in the just-completed Chinese Super League season, guiding them to the Asian Champions League for the first time, before resigning earlier this week.
Local Talent
Guangzhou have won the league in each of the seven seasons since gaining promotion to the top flight at the end of 2010 as second division champions. Their upturn in fortunes came after the Evergrande corporation bought the club at the start of 2010.
Evergrande owner Xu Jiayin said the goal was to have a successful team made up of entirely of local talent.
"We will look to gradually reduce our need for foreign players and we hope to maintain the team's quality by 2020, but with a fully Chinese squad," said Xu. "But we don't want an all-Chinese team and have our standards drop.
"The coach has signed a five-year contract with us, so that means he will be part of the process through to 2020," added Jiayin. "He is quite confident, too, that Evergrande will be a strong team even when it is all-Chinese."
Guangzhou's desire to transition to an all-Chinese team comes at a time when clubs have been spending huge sums on foreign talent while the national team continues to struggle: Shanghai SIPG broke the Asian transfer record in January when they signed Oscar from Chelsea for 60 million euros before a crackdown by the Chinese Football Association later in the year reduced the number of foreign signings to a trickle.
National team coach Lippi has complained about a lack of Chinese strikers in a league where the forward positions are dominated by foreigners. SIPG's Wu Lei was the only Chinese player this season to score more than 10 league goals.
Cannavaro, who counts Juventus and Real Madrid among some of the clubs he's played for, was captain of the 2006 World Cup winning Italy side that beat France 5-3 on penalties at the Olympiastadion in Germany.
He was also captain of Juve, and after seeing the Bianconeri being stripped of two their Italian Serie A titles and relegated to Serie B in the wake of the calciopoli match-fixing scandal, was one of many high-profile exits from the Turin-based club, after which he joined Spanish giants Real Madrid.