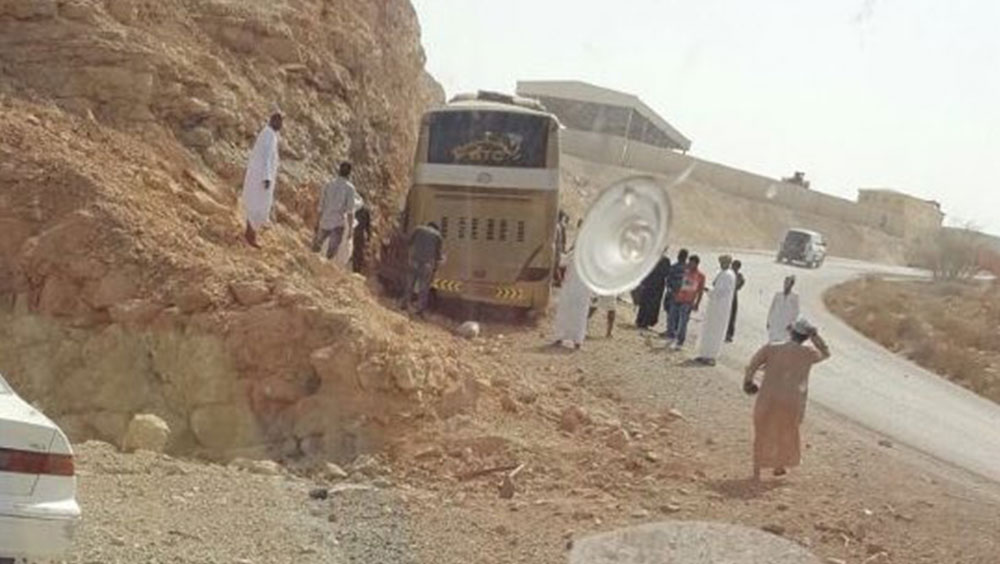 Muscat: Twenty five people were injured, four of them seriously, after a bus overturned on the Salalah to Muscat road.
The coach overturned on its way from Salalah to Muscat yesterday, on the stretch of road between Nizwa and Muscat.
Also read: Blood bank seeks urgent donors following Muscat-Nizwa road accident
A Royal Oman Police (ROP) spokesman said: “A passenger bus carrying 50 people and travelling towards Muscat overturned on the road. The incident resulted in 25 people receiving various injuries, who were rushed to several hospitals.”
Initial reports that 25 people had died in the crash were quickly denied by the police.
Four of the victims were transported to the Sultan Qaboos University Hospital (SQUH) under code red, according to the SQUH emergency ward.
“One had a ruptured globe (eye ball), one had a splenic (spleen) injury. One other patient had multiple fractures in his left arm and forearm with a lacerated wound, and the last one had to undergo partial amputation of the right forearm. All of them are non-Omanis,” personnel at the emergency room said.
A spokesman from the private bus operator declined to comment, but said he was aware that the accident had occurred.
The National Centre for Statistics and Information (NCSI) reported that 1,589 injuries were reported during road accidents until the end of June this year. NCSI added that the figure reflects a 2.7 per cent drop from the same period in 2016.
In response to the accident, the Ministry of Health set into place its emergency evacuation plan, rushing people to the nearest hospital in Muscat, and the Department of Blood Banks Services (DBBS) sent out messages asking for residents to answer their call for an urgent need for blood.
“Baushar Blood Bank invites you to donate blood today, where there is more than one case requiring blood transfusion,” said DBBS in a tweet.
To donate, please visit the Baushar Blood Bank at the earliest, or call 24591255 or 24594255. You can also WhatsApp the blood bank at 94555648.