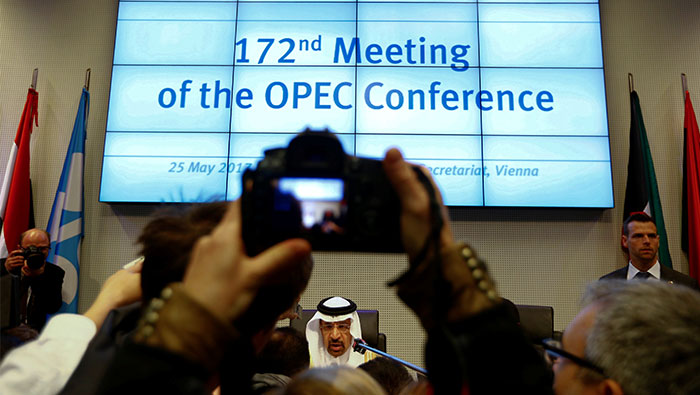 Muscat: Crude prices are expected to rise as OPEC renewed the production choke deal with independent producers in Vienna on Thursday.
The agreement reached in November last year was due to expire this June but shale oil resilience and lower than expected global inventories depletion forced oil producers to roll over the deal for another nine months until March 2018, under same terms and conditions.
Oman, the largest non-OPEC producer in the region will continue to cut production by nearly 4.5 per cent. The Sultanate reached one million barrels per day average production for the first time in history in 2016 but will continue to choke its production at 970,000 bpd, slashing 45,000 bpd in adherence to the agreement
Although Oman crude fell to $52.90 at the Dubai Mercantile Exchange hours before the decision was announced at a press conference headed by OPEC secretariat, prices are expected to rally. According to reports, traders had already started to hike prices in anticipation of deal roll over and may continue to do the same as the deal has now been done.
The first phase of the production cuts deal was reached late last year to control free falling oil prices that brought a massive trade deficit for oil dependent economies. Oil gained nearly 30 per cent in months following the agreement in November and has since stayed around the psychological safe haven of $50, partly due to buoyancy given by expectations of renewed cuts. The deal has witnessed unprecedented compliance level, especially from OPEC members that topped 100 per cent in April this year.
OPEC driven oil price rally may however be impeded by US decision to sell half of its emergency stockpiles, making production cuts redundant as it won’t allow oil inventories to deplete at rates preferred by GCC economies.
Meanwhile, US rig count increased by 16 over the previous week to reach 901, according to data by Baker Hughes, amounting to 497 year on year rise. The US output increased by nearly 900,000 bpd in the past one year.