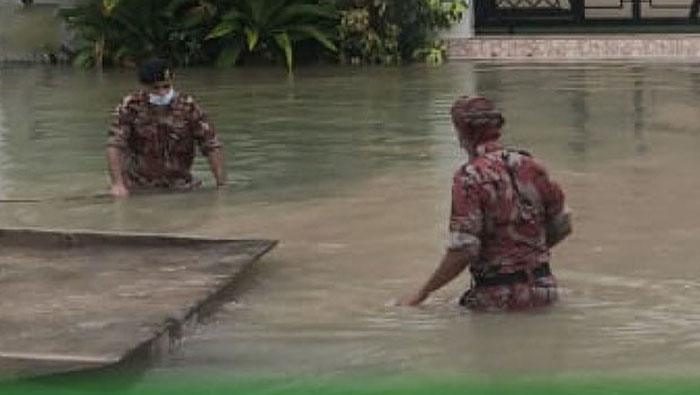 Salalah: Search and rescue teams have saved more than 50 people from the rains and floods in the Dhofar region, since they began on May 29.
Several government authorities have deployed personnel on the ground in Salalah and other areas of Oman’s southern governorate to help keep people safe from the torrential rains, and ensure the roads are clear of falling debris.
Three persons – two Omanis and one expat – have died by drowning in the floods caused by the rains, while one person has been reported missing, and efforts to find him are currently underway. The Royal Oman Police has asked people in Dhofar to not hesitate to call them if they need help.
“Ours is a hand that always provides assistance to you,” said the ROP in a statement. “Do not hesitate to ask for help in case of need from the concerned authorities during these exceptional circumstances experienced in the Dhofar Governorate.”
Teams from the ROP, in coordination with the Public Authority for Civil Defence and Ambulance, Dhofar Municipality, and armed forces units in the governorate are on 24x7 duty to minimise the loss of life and risks posed to property owing to the bad weather.
“Rescue teams have been spread across various wilayats of Dhofar Governorate, and we would like to note that any decrease in rainfall does not mean that you are clear of danger, so we call on everyone to understand the necessity of staying in their homes and away from wadis and streams for your safety,” said statements from PACDA.
“Rescue teams are present near wadis and roads to urge citizens not to risk crossing them, as a result of fast-flowing water present in several wadis in the Wilayat of Mirbat.”
Although warnings have been issued to people to stay at home, some of those who have ventured onto the roads have had their vehicles bogged down in wadis, resulting in PACDA deploying teams to get both the vehicles and the people in them safely out.
“Rescue teams from the civil defence and ambulance department are dealing with many reports of vehicles getting stuck in the Wilayat of Mirbat,” said the authority.
In one operation, an Omani family of 14 was rescued after they’d gotten stuck in their home, and were unable to leave it due to the rain. Three expats also needed assistance after getting caught in a flooded wadi in Mirbat. The Royal Air Force of Oman (RAFO) also organised an airlift operation for 23 people. Some of them were unable to escape the floods near their oil rig installation in Marmul, while others needed help after becoming stranded on the Hallaniyat Islands off the Dhofari coastline.
Two young Omanis lost their lives when they were unable to escape the flash floods in Arzat, while an expat faced the same fate in Mirbat. One Omani citizen is reported missing in Thumrait, and the search for him is ongoing. Dhofar governorate police command has also detained three Omanis who purposely attempted crossing a wadi, putting themselves at risk in the process. Legal measures are to be taken against them.