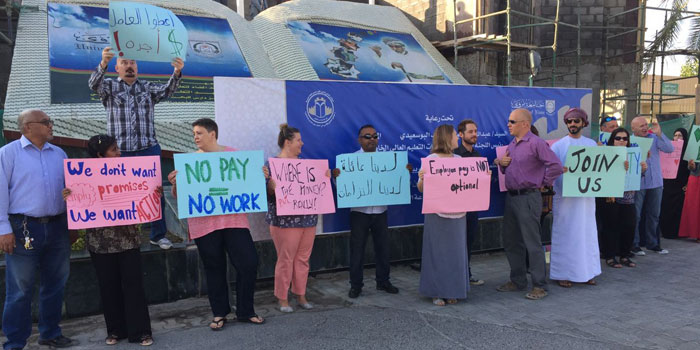 Muscat: Senior officials at the Ministry of Higher Education say they are working to resolve salary delays for staff at Nizwa University.
A section of staff at the University of Nizwa went on a demonstration on Tuesday morning after they were allegedly “not paid on time.”
When contacted, a spokesperson of the Ministry of Higher Education (MoHE) said, “We are taking the issue seriously and have conducted a meeting with senior officials to address the issue.”
Meanwhile, Nizwa University issued a statement on Tuesday refuting rumours that have been circulating on social media about the university going bankrupt.
“We would like to point out that Nizwa University is an independent civil institute, it is not considered a commercial company based on profit, so (that) it can be announced bankrupt, hence leading to its closure,” the statement.
The statement added that the university is going through “tough times” regarding its cash flow, but it is estimated that expenditures are close to its estimated revenues.
“Neither the university, nor society, will allow things to get this bad. We assure everyone that education in the university will not be affected, and neither will the students,” it said, adding that the university is trying to perform as best it can, “as always”.
Citing details, a staff member said that the university usually issues salary payments on the 28th of every month.
“According to Omani labour law, they should be paid no later than the 8th of the following month. We did not receive our October salary until November 7, along with a message stating we would only receive half our salaries. The other half has still not been delivered to the teachers. Now it is November, and the salary is 21 days past the legal deadline,” a staff member wrote in an email to Times of Oman.
The staff member also said, “We held a peaceful demonstration this morning, with approximately 20 teachers standing quietly at the entrance to the university with signs. There were about 35 teachers overall, though teachers came and went when they had classes. Teachers are only demonstrating at this point, they haven’t yet decided to strike and refrain from teaching their classes, though that might be a possibility if the pay still does not arrive by the end of the week.”
Meanwhile, staff members were seen demonstrating, with one member holding a sign reading, “Employees pay is not optional” at the entrance to the university on Tuesday. “We don’t want promises, we want action,” read another sign.
Staff members claimed that this is the second time this year that their salaries have been delayed. “We’re pretty upset and we don’t know what’s going on,” noted one staff member from Nizwa.