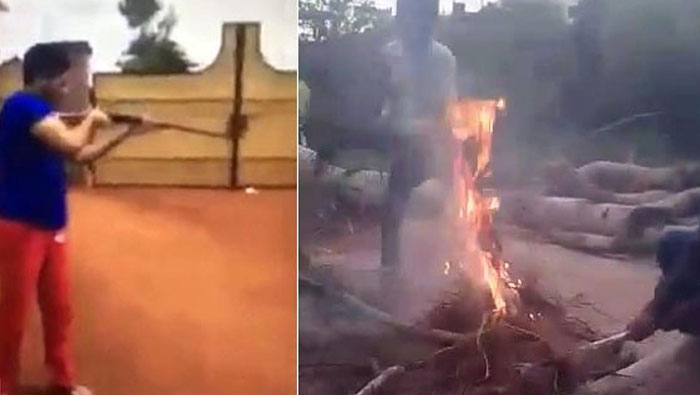 Hyderabad: In a chilling incident, three puppies were allegedly burnt alive by a group of youngsters, one of whom recorded the gruesome act, police said on Wednesday.
The dastardly attack on dogs took place at a graveyard in Musheerabad area on the afternoon of July 16 and came to light on Tuesday when a video of the incident went viral on social media. A group of youngsters caught three stray puppies and tied them together.
They then dragged the hapless animals to some distance and put them into a fire made out of jute bags and dry sticks, Shreya Paropkari, an animal rights activist, said in a complaint filed with Musheerabad Police.
"One of the perpetrators recorded the entire incident and is heard instructing and instigating the others to set them on fire. The recordings were recovered from a fish stall owner in Musheerabad," she said in the complaint.
Following the complaint, a case was filed under IPC Section 429 (mischief by killing or maiming cattle, etc,) and relevant sections of Prevention of Cruelty to Animal Act, Sub- Inspector B Bhaskar Rao said, adding that efforts are on to nab those involved in the incident.
"We got a report on the incident after which I filed a police complaint," Shreya, who works as Cruelty Response Manager with the Humane Society International, told PTI.
Earlier, Shreya and Vasanthi Vadi, an activist with the NGO, People for Animals, met Hyderabad Police Commissioner M Mahender Reddy and submitted the video clip of the incident.
The gory incident in the city comes weeks after two MBBS students flung a stray dog from the roof top of a building in Chennai.