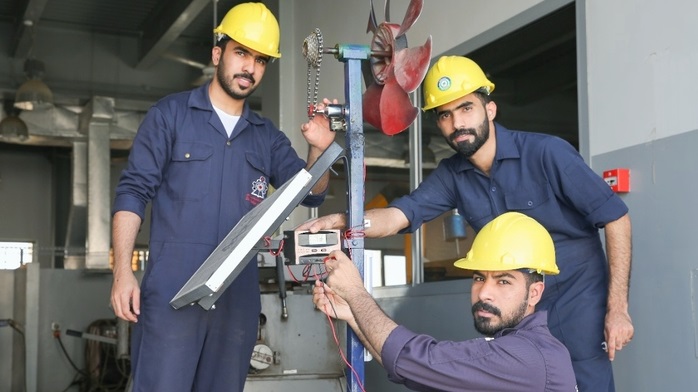 Muscat: A team of engineering students at the University of Technology and Applied Sciences in Shinas managed to manufacture a device to generate electricity from solar and wind energy.

The student, Ahmed bin Hamad Al Weshahi, majoring in engineering at the University, explained to Oman News Agency that the idea of the device is based on two different ways to generate electrical energy through solar cells and a windmill system to combine the device with two renewable energies (sun and wind) in the production of electricity in places far from cities and places where electricity is not available.

He pointed out that the device has many uses, including camping trips far from cities and is also characterised by ease of operation and use and maintaining the production of clean and environmentally friendly electric energy, pointing out that the team is working on developing the project by making an electric generator that works on the pattern of sustainable magnetic energy and operating the electric generator. In order to generate permanent electrical energy.

He added: The team consisting of Mishaal Al Weshahi and Walid Al Makhmari from the engineering major at the University of Technology and Applied Sciences in Shinas was able to transform the idea into reality through this device without affecting nature or contributing to global warming, noting that the device does not depend on oil, gas or coal for power generation, which contributes to saving a lot of money.

He explained that the project can be developed significantly in the future to produce electrical energy through two different systems that rely on clean energy from wind and the sun to keep pace with the development witnessed by the world in general in the production of electrical energy from renewable energy.