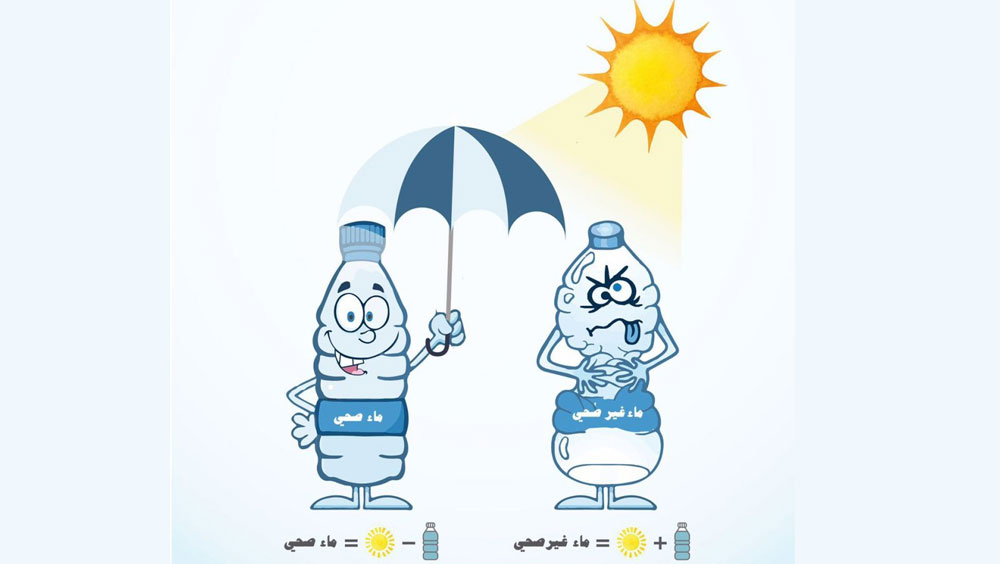 Muscat: Residents in Oman have been warned not to leave plastic water bottles out in the sun, as this could cause cancer.
“For your health, avoid keeping and storing drinking water under the sun,” tweeted the Muscat Municipality, which is running a campaign on the adverse health effects of chemicals from plastic bottles leaching into the water stored inside them. Dr. Sajeev Bhaskar, a general practitioner at the Al Lamki Polyclinic, highlighted the effects this could have on people.
“These bottles may have the ISO mark of approval, but just because they have that, doesn’t mean it is always safe to drink because sometimes, they are not stored properly,” he explained. “Plastics contain a highly carcinogenic compound called Bisphenol A, which is commonly used for bottled water and leaches into it water at a certain temperature.”
“Bisphenol A stimulates prostate cancer cells and causes tissue changes that resemble the early stages of breast cancer in both mice and humans,” he added. “Higher levels of Bisphenol A in humans have also been associated with ovarian dysfunction. If at all you do need to keep bottles of water in your car, please store them in glass bottles.”
Dr. Basheer, an internist and diabetologist at the Badr Al Sama’a Hospital, also agreed with the need to exercise caution when it came to storing water in the sun.
“In the long-term, plastics in water can cause cancer,” he revealed. “While long-term exposure is definitely dangerous, it is also very common to suffer from lung diseases in the short-term. It is very dangerous to keep plastic bottles in your cars and in places that have direct exposure to sunlight.”
Always cover
“It is common for those who are involved in field work to keep their bottles in the sun, but this is dangerous,” added Basheer. “If they are working outdoors, it is better to cover these bottles with a cloth, so that sunlight does not directly penetrate them. These provisions must be made by the company that is sending workers into the field, and ideally, they should be provided with a cooler to store their drinks.”
Oman’s Public Authority for Consumer Protection (PACP) also weighed in on the matter. “The World Health Organisation (WHO) suggests 1,000 ppm (parts-per-million) or less,” they tweeted, in response to queries about safe toxin levels in drinking water, adding, “In bottled drinking water, this should be between 100 and 600ppm.”
Raids carried out by PACP have led to caches of improperly stored water in the past. This July, according to the authority, “the Department of Consumer Protection in Al Dakhiliyah Governorate recently destroyed, in cooperation with the Municipality of Izki, a quantity of bottled mineral water containers, because they did not comply with the standard specifications.”
“Drinking water bottle boxes were found packed and stored in unhealthy storage conditions, and samples were taken for examination,” added the PACP spokesperson. “The results of the examination by the Food Control Laboratory of the Directorate General of Regional Municipalities and Water Resources in Al Dhakhiliyah showed that the product does not conform to the reference standard, and there was a change in taste and smell due to storage conditions.”
“The Public Authority for Consumer Protection calls upon all merchants and suppliers to abide by the provisions of the Consumer Protection Law and its executive regulations to avoid legal accountability,” he added.