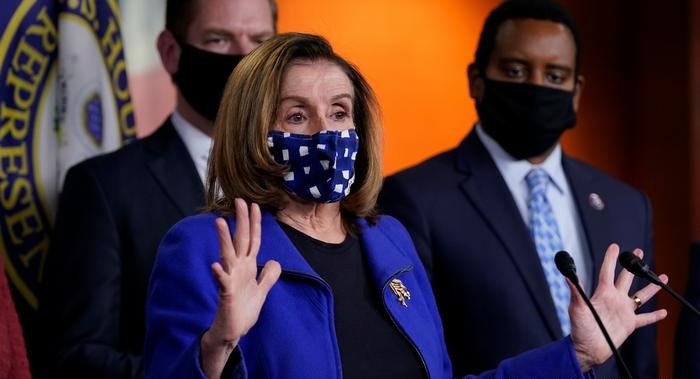 Top Democratic leader and House Speaker Nancy Pelosi on Monday announced a probe into the breach of the US Capitol Building by former President Donald Trump's supporters on January 6. The storming of the Capitol left five people dead, and ultimately led to Trump's second impeachment by the House.

Pelosi said the "outside, independent 9/11-style Commission" would seek to review the "facts and causes" behind the breach. "We must get to the truth of how this happened," Pelosi asserted.

Pelosi's remarks come after the Senate on Saturday voted to acquit Trump of his role in the breach during an impeachment trial. Seven Senate Republicans voted to convict the former president, joining all 50 Democrats in the upper chamber, but this ultimately fell short of the 67 senators needed for conviction.


Some Republicans have also called for a 9/11-style commission into the breach. Lindsey Graham, a Republican senator from South Carolina and a staunch Trump ally, said the probe would be needed to better protect the Capitol from future intrusions.

"We need a 9/11-style commission to find out what happened and make sure it never happens again, and I want to make sure that the Capitol footprint can be better defended next time," Graham told Fox News on Sunday, adding that Trump's behavior after the 2020 election was "over the top."

After it was clear that Joe Biden won the November election, Trump continued to deny the results, claiming there was widespread voter fraud without any concrete evidence. Trump's legal team, led by former New York Mayor Rudy Giuliani, filed lawsuits across the country disputing Biden's win, but the cases failed to prove the fraud allegations.


After Trump's dozens of lawsuits failed to gain any traction, the former president began to pressure state and local officials to overturn the results. On January 2, Trump called Georgia Secretary of State Brad Raffensperger, pressuring him to overturn Biden's win in the state.

Although Trump was acquitted of inciting the breach in the Senate impeachment trial, some Republicans have claimed the former president could still be prosecuted. Senate Minority Leader Mitch McConnell, a Republican from Kentucky, said it was "no question" that Trump was "practically and morally responsible" for the riots on Jan. 6.

"We have a criminal justice system in this country. We have civil litigation. And former Presidents are not immune from being held accountable by either one," McConnell said in a floor speech on Saturday. McConnell had voted to acquit Trump, arguing impeachment was unconstitutional since he had left office.


Biden's nominee for attorney general, Merrick Garland, has been urged by a prominent left-wing organization to prosecute Trump and his associates for their role in the Capitol breach and other crimes. After Trump was acquitted on Saturday, the Progressive Change Campaign Committee (PCC) circulated a petition to pressure Garland into investigating Trump.

"If we want accountability for Trump and his criminal network, we cannot just depend on Democratic leaders,” a statement from the PCC said. "We need to push them, a lot," it added.