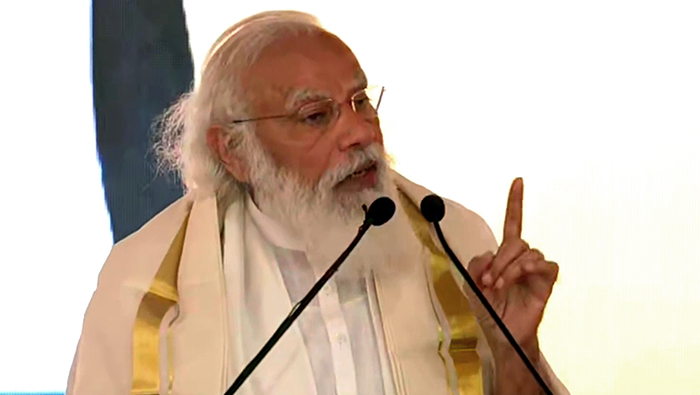 Kochi: Prime Minister Narendra Modi on Sunday praised the Indian diaspora in the Gulf region and said that it was an honour for the 'Vande Bharat Mission' to serve them in such a sensitive time as the COVID-19 pandemic.

"India is proud of its diaspora in the Gulf. It has been an honour to be able to spend time with them during my previous visits to Saudi Arabia, Qatar, UAE and Bahrain. I shared meals with them and interacted with them," he said. Mentioning the Vande Bharat Mission, the initiative undertaken by the government to bring back stranded Indians during the COVID-19 pandemic, PM Modi said, "Over 50 lakh Indians came back home under the Vande Bharat Mission. Many of them were from Kerala. It was our government's honour to serve them in such a sensitive time."

PM Modi also raised the issue of detention of Indians in the Gulf region.

"In the last few years, the govt of various Gulf nations have also kindly released various Indians who were sadly in prisons there. Our government will always speak up for such people. I thank the governments of various gulf nations for their sensitive approach on this subject.

Gulf countries responded to my personal appeals and took special care and took care of our community," said the Prime Minister.

On a brief visit to Kerala, he assured the diaspora saying Indians working in the Gulf should know they have the full support of our government.