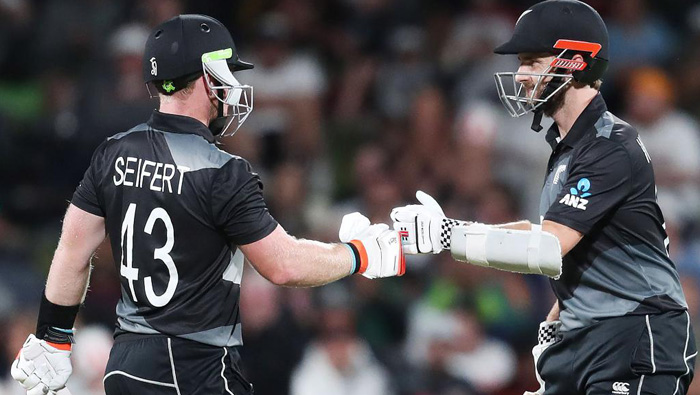 Hamilton:  New Zealand cricketer Tim Seifert is famous for hitting the ball in different parts of the ground, but the wicket-keeper batsman feels like having a lot of shots can sometimes result in the downfall as well.

Seifert had missed a scoop shot at Eden Park last year against Chris Jordan. The England bowler anticipated the scoop shot coming and bowled a wide yorker away from Siefert's reach. The Kiwi player said he learned from those errors and added the batsmen should actually play the '360 degree' shot when there have been a few dot balls.

"Being able to play 360 [degrees] -- sometimes a lot of shots are going through your head, which can be a downfall as well. So, I think it was big learning that I got off to a good start, but I didn't really push through," ESPNcricinfo quoted Seifert as saying.

"So, it's just a matter of standing still and reacting. You know when you need to bring those shots out like tonight (Sunday) there were a few dots balls that built up, so I knew it was the right time and right option," he added.

The right-handed batsman said he was one good ball away from firing on all cylinders against Pakistan in the second T20I. He admitted that the Kiwis innings got stuck in the middle for a little amount of time but it was one good ball needed to unleash the beast in him.

"There was a tricky little period when Kane [Williamson] came in. But, you know in T20 cricket if you just ride that wave, the tough little period could just be one or two overs. Then you get one good ball out of the middle -- that gets your innings underway," Seifert said.

Chasing 164, New Zealand got off to a quickfire start as openers Martin Guptill and Seifert put on 35 runs in just 21 balls.

However, Pakistan came back strongly as Faheem Ashraf dismissed Guptill (21) in the fourth over of the innings.

Skipper Williamson then joined Seifert in the middle but the latter did not let the momentum drop for the hosts.

At the halfway mark, New Zealand was sitting comfortably at 91/1, with just 73 runs away from the victory. In the end, Williamson and Seifert guided Kiwis to a nine-wicket win over Pakistan.