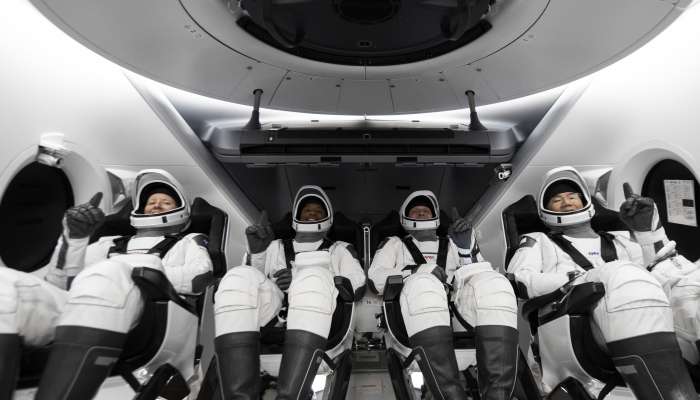 New York: A SpaceX spacecraft carrying four astronauts soared into outer space on Sunday, marking the kick-off of what NASA (National Aeronautics and Space Administration) hopes will be years of the company helping to keep the International Space Station (ISS) fully staffed.

NASA astronauts Michael Hopkins, Victor Glover, Shannon Walker, and Soichi Noguchi, an astronaut with Japan's space agency, are now in orbit, riding aboard a SpaceX Crew Dragon capsule that is expected to dock with the ISS on Monday at 11 pm ET (9:30 am IST, Tuesday), reported CNN. This is a landmark mission for NASA and the company because it is the first fully operational crewed mission for SpaceX, following up a test mission in May that carried NASA astronauts Douglas Hurley and Robert Behnken, both test pilots, to the space station.

The crew will spend 27 hours in orbit as the spacecraft slowly manoeuvres toward its destination.

The trip would have been shorter if the Crew Dragon were able to launch on Saturday, as NASA first planned, however bad weather brought by Hurricane Eta forced launch officials to delay takeoff to Sunday.

The capsule has a working restroom, and the astronauts will have time to get some sleep as the fully autonomous vehicle manoeuvres through orbit while SpaceX and NASA officials in Houston, Texas, and Hawthorne, California, watch over the journey, reported CNN.

Sunday's mission was briefly thrown into question after SpaceX CEO Elon Musk revealed on Twitter that he was experiencing symptoms and was being tested for COVID-19, prompting NASA to carry out a contact tracing effort to ensure no essential personnel for the launch might have been exposed.

According to CNN, the US has spent nearly a decade without the ability to launch astronauts into space after the retirement of the Space Shuttle program in 2011, and NASA was forced to rely on Russian Soyuz spacecraft to get astronauts to the ISS, which the space agency says left the multibillion-dollar orbiting laboratory understaffed.

SpaceX developed the Crew Dragon capsule under NASA's Commercial Crew Program, which, for the first time in the space agency's history, handed over much of the design, development and testing of new human-rated spacecraft to the private sector.

US President Donald Trump reacted to the news by saying that NASA was a closed up disaster when he assumed the presidency in 2016 and was now the 'hottest', most advanced space center in the world.

"A great launch! @NASA was a closed up disaster when we took over. Now it is again the "hottest", most advanced, space center in the world, by far!" he wrote on Twitter.

US President-elect Joe Biden also congratulated NASA and SpaceX on the launch.

"Congratulations to NASA and SpaceX on today's launch. It's a testament to the power of science and what we can accomplish by harnessing our innovation, ingenuity, and determination. I join all Americans and the people of Japan in wishing the astronauts Godspeed on their journey," tweeted Biden.