Hundreds arrested in Belarus as opposition looks to Biden 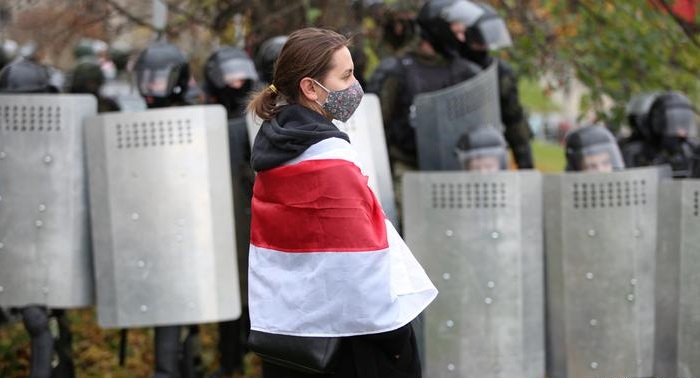 Belarusian police clashed with demonstrators who were demanding the resignation of the country's authoritarian leader on Sunday, almost three months to the day since a disputed election earned President Alexander Lukashenko a sixth term.

For the 14th consecutive Sunday protesters turned out on the streets of Minsk and human rights activists said more than 800 people were arrested.

Thousands of demonstrators tried to enter the center of the Belarusian capital from several directions, but authorities cordoned off the area with armored vehicles and phalanxes of riot officers wielding batons who prevented protesters from gathering in one place.


The wave of protests, unprecedented in their size and duration, began after the August 9 election that official results say awarded Lukashenko another stint at the helm. The EU and others have questioned the legitimacy of the result. The opposition and some poll workers say the election outcome was manipulated.

Lukashenko, who has suppressed both opposition and independent news media since coming to power in 1994, has refused dialogue with opponents and has alleged that the West has incited the recent unrest.


His main election challenger, Sviatlana Tsikhanouskaya, who fled to Lithuania under pressure from officials after the nationwide ballot, is seeking the help of US President-elect Joe Biden, to heap pressure on her political foe.

"Joe Biden has spoken out more than once and taken a firm position of support for the Belarusian people," she said.

She also told protesters to maintain the pressure. "We have stood against lawlessness and violence for 90 days already. In these 90 days, Belarusians made the regime understand that they have lost legitimacy and authority," she said.