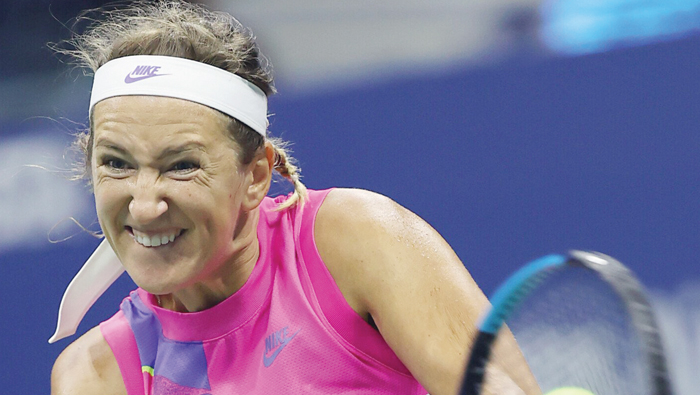 Washington: Former world number one Victoria Azarenka of Belarus rallied to beat 23-time Grand Slam champion Serena Williams of the United States in the US Open on Thursday to reach her first Grand Slam final since 2013, where she will play 2018 champion Naomi Osaka.
"Seven is my favorite number, so I guess it's meant to be," Azarenka said, joking about the gap between major final appearances. "I'm very grateful for this opportunity, to be able to play such a champion in a semifinal. The road to the final requires you to beat the best players, and today was definitely that day."
Two-time Grand Slam winner Azarenka seemed headed for an agonizing loss after being hammered 6-1 by Williams in the first set, but the 31-year-old turned the tide, raising up her level and reducing the unforced errors before securing the 1-6, 6-3, 6-3 victory.
"She dug me in a big hole in the first set. I had to climb my way out of there one by one, and I was happy to turn it around, because it wasn't easy. I think it's the daily work I've been doing to find that calm mind and match it with an excited body, because I had to keep moving and bringing the energy. There's no crowd to get energy from, so I had to give it to myself," Azarenka said.
Azarenka will play Japanese star Osaka in the women's final. In the other semifinal, Osaka overpowered American 28th seed Jennifer Brady 7-6 (7-1), 3-6, 6-3 to reach her second US Open final in three years.
The Japanese superstar fired 35 winners to 17 unforced errors to take down the American.
"Sometimes I think I have no choice but to play as hard as I can, because my opponent isn't giving me any looks," Osaka said of the hard-fought match. "For me, normally if I focus that much, then the match potentially could be over in two. But I felt like it just kept going on."
In a showdown between two clinical power-hitters, Osaka and Brady split the opening two sets, with Osaka claiming the tiebreak in the first and Brady taking the sole breaking chance in the second.
In the decider, the 22-year-old Osaka finally created her first break chances, and converted en route to a 4-1 lead. After that, Osaka never looked back.
"I consider New York my second home, I really love the atmosphere, even though sadly there are no people here, I really feel this court really suits me well," Osaka said.
In the men's doubles final, Brazilian Bruno Soares and Mate Pavic of Croatia defeated eighth seeds Nikola Mektic from Croatia and Dutch player Wesley Koolhof 7-5, 6-3 to take the title.
It's the first Grand Slam title for Pavic and Soares as a team as both men had previously won majors with different partners.
"It means a lot. That's what we practice for. That's what we were trying to do in these five months off, working for this moment," Soares said.
"Extremely happy. Tough year for everyone. Really glad the work that everyone put into this event to give us the opportunity to get back on the court," he added.