Why Messi wants to leave Barcelona 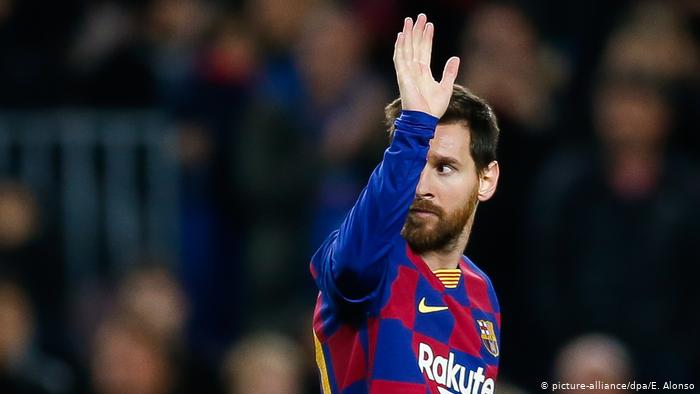 Madrid: The news that broke on Tuesday that FC Barcelona forward Lionel Messi has told the club he intends to leave this summer has produced shockwaves in Spain, and has almost spawned more headlines in the country's newspapers than the rise in COVID-19 cases.
To say that the 33-year-old is the symbol of Barcelona is an understatement, and the fact that he wants to leave after 20 years in which he has given everything for the club highlights just how bad things have become at the Camp Nou, both on and off the field.
Rumors of Messi's discontent surfaced after their 8-2 Champions League humiliation by Bayern Munich less than a fortnight ago, with images of the player's head down in the tunnel before the start of the second half capturing his despair, as an aging team was ripped apart by the soon-to-be-crowned European champions.
Maybe that was the moment Messi looked around at the squad and realized his dream of another Champions League was impossible at Barca, with a squad that needed a complete overhaul with veterans leaving, new players arriving and time for the new squad to mature.
Unfortunately, a 33-year-old doesn't have the luxury of time on their side, and although Messi still ended the season as Barca and Spain's top scorer, there were signs that his body is starting to show the signs of 18 seasons in the elite, with more muscle problems and more games where he exerted less of an influence.
The 8-2 defeat had an immediate effect with Quique Setien sacked as coach, which probably didn't upset Messi too much, as his relationship with Setien and especially assistant Eder Sarabia was fraught with tension.
Ronald Koeman was appointed Setien's successor and immediately said he wanted Messi to stay and lead his project. However, according to the Spanish media, the strong-willed Koeman told Messi that 'the privileges are over', meaning he would no longer have such a strong influence over the dressing room and that Koeman would be the one and only boss.
Koeman may well be right, but his words will have done little to persuade Messi to stay, and the coach's next move will only have helped push him further towards the door.
The Dutchman has already informed Samuel Umtiti, Luis Suarez, Arturo Vidal and Ivan Rakitic that they no longer form part of his plans and should seek new clubs.
Once again, there is some wisdom to this in football terms, with Umtiti's recent seasons ravaged by injury, Suarez 34 in January and Vidal and Rakitic both 32.
However, Messi is close to Vidal and especially to Suarez, with whom he has formed a devastating attacking partnership over the past six years, and to see them shown the door after a brief phone call must have hurt.
So Messi was in a situation where his friends were, in his opinion, treated badly, and where he had been told he is to lose his influence - hardly the message to give if you want a player to stay, and that is before looking at the backroom situation at the club.
President Josep Maria Bartomeu has to shoulder much of the blame for the situation: he allowed the squad to grow old and has never given the sense of being completely in control ever since replacing Sandro Rosell, who stepped down in 2014 to answer corruption charges.
Bartomeu's time in office as seem a big turnover in directors, and the sheer number of leaks coming from the club says little of a stable and happy ship, while reports last year that the club actually hired a social media company to damage the image of Messi, Gerard Pique and other players lost Bartomeu the support of the dressing room.
The fact that Barca legend Carles Puyol (a man who spent his entire career at the club and probably bleeds 'blaugrana') immediately tweeted his support for Messi's decision speaks volumes about the depth of feeling against Bartomeu, and the fact that both Suarez and Vidal applauded Puyol's tweet says even more.
Meanwhile, fellow Barca legend Xavi Hernandez turned down the chance to coach the club in January and again this summer, and has aligned himself to opposition leader Victor Font for next March's presidential elections.
Although Bartomeu has already said he won't stand in 2021, Messi's decision makes it virtually impossible for any Bartomeu supporter to win in March, and could even force Bartomeu to resign sooner - if the Argentinian wanted revenge for the social media allegations, he has now got it with interest.
There are still many questions to be answered, not least over Messi's contract, which does allows him to leave at the end of last season for nothing. However, Barca say that clause expired in June and that if he wants to leave he will have to pay his 700 million euro release clause.
Messi's camp argue that due to the season's COVID-19-enforced stoppage, Barca's campaign didn't end until August 14 and he can still leave now for free.
The issue could be resolved in court, but surely the club won't want the ugly spectacle of taking legal action against the man who has been their star player and the key symbol of FC Barcelona for a decade and a half. That would drag Barca and Bartomeu's already tarnished image down into the mud and is something their fans would never forgive.