Give us amnesty, say stranded expat workers in Oman 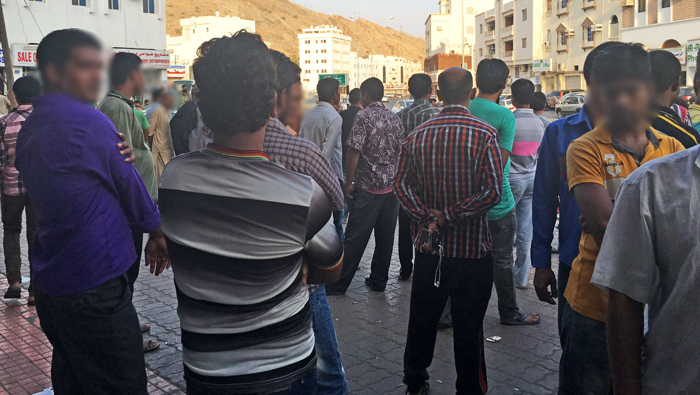 Muscat: Illegal immigrants are calling for an amnesty in Oman so they can turn themselves in as black market work dries up in the tough economic conditions.
Read here: How an undocumented expat worker survives in Oman
The workers – mainly Bangladeshis – are stuck in limbo with fines mounting as they have no work and their visas have expired.
Get your essential daily briefing delivered direct to your email inbox with our e-newsletter
Now all they want to do is return home. With government fines imposed every month an expat worker remains in the country illegally, workers face paying huge sums to leave but have no work and no money.
A Bangladesh embassy official said there is an urgent need for a new amnesty. Some workers caught in the fines trap face paying thousands of rials just to leave Oman.
“For the last few months, there is no job at all due to the economic condition. The majority of us are undocumented and some are ill too. Most days, we go to bed with hunger pangs. We are stuck in Oman. Only an amnesty can rescue us as we won’t be able to pay fines for overstaying,” Mohammed Milon and Abdul Nazir Razaq, two overstaying Bangladeshi workers, told Times of Oman.
Amnesty is a programme announced by the Oman government which gives workers an opportunity to fly back home without paying fines for overstaying and being undocumented.
An overstaying expat will have to pay around OMR20 for visa charges at the immigration counter at the airport and OMR19 at the Ministry of Manpower counter for every month they remain in Oman.
“The fine at the Ministry of Manpower would be calculated for every month and the immigration counter fine will not be calculated after 25 months or once it reaches OMR500,” Deepa Sudhir, a legal advisor in Muscat, said, adding that if there is an absconding case slapped on the worker, then he has to pay OMR400 extra.
Mohammed has been in the country for two years without legal papers. He would have to pay around OMR956 to exit and Abdul, who has been here for the last 10 months, would have to pay OMR390 – money they just don’t have.
“Daily, from 5am, we wait on the street till 11am hoping that we may get a job. Nobody is coming nowadays. Without money, food and medicines are a big problem now,” one worker said.
Both Mohammed and Abdul are receiving money in Oman by arranging with their relatives back home to pay agents in Bangladesh.
They can then access some of that money here in Oman, but the middlemen take a large cut.
For 20,000 Bangladesh taka, the workers here get around OMR95. A Pakistani worker, who has not even seen his sponsor, said that there are thousands in the same situation.
“Undocumented, overstaying, ill, no job, no food.... we came to earn a better living for our family. Now, our family is forced to take loans, paying agents to support us here. Without an amnesty, we won’t be able to get out of this trouble,” the Pakistani worker added.
A senior official from the Bangladesh embassy has said that there is an urgent need for an amnesty.
“Hundreds of jobless workers are languishing in Oman without proper papers. The majority of them are not in a position to clear the fines and fly back home. So, we feel that by announcing an amnesty, we can resolve this overstaying workers issue and help them,” the senior official said. “We are aware that the numbers of overstaying and undocumented workers will be thousands. “Government can announce an amnesty and rescue these workers. We somehow manage to repatriate sick workers, even if they are undocumented, with the help of the Oman government, by writing off their fines, but it cannot be done for all,” the senior official added.
The last amnesty was announced on May 3, 2015. Initially it was announced for three months, but the scheme was extended to six months to provide more time to undocumented workers to make use of the amnesty and leave Oman.
According to the Ministry of Manpower, during the amnesty programme, 23,653 expatriate workers left Oman.
However, of the 23,186 Bangladeshis who registered during the six-month-long amnesty scheme, around 7,300 did not make use of it.
The official in charge of the community welfare section at the Bangladesh embassy told Times of Oman that 7,300 didn’t turn up after registration.
A social worker in the Bangladesh community in Oman also said that a new amnesty will be a blessing for these workers.
“We know that they are stuck in Oman without job and food. If the government announces an amnesty, it would be a blessing for them,” Mohammad Sanaullah, a Bangladeshi social worker, said.