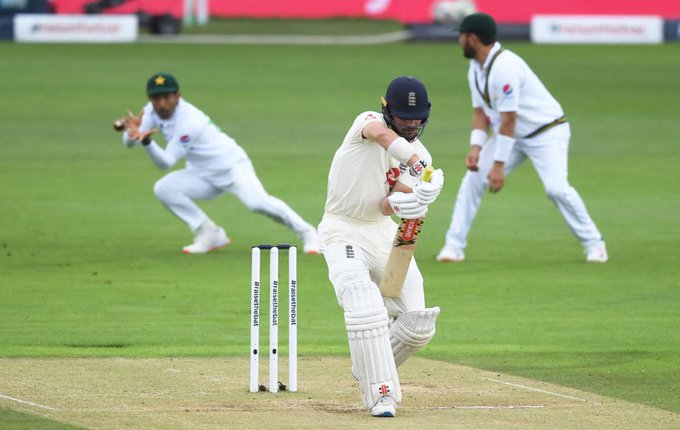 Southampton: Only 10.2 overs were bowled on the fourth day in Southampton as more wet weather held up proceedings. After the third day was washed out in its entirety, Pakistan resumed their first innings on 223/9 on the fourth morning.
Mohammad Rizwan delivered a couple of crunching blows to take his score to 72, and the team score to 236, before Stuart Broad forced a leading edge which straight to an obliging Zak Crawley in the covers. Broad finished with figures of 4/56, the seventh consecutive Test innings in which he has claimed at least three wickets, while James Anderson returned figures of 3/60 to bounce back after struggling for rhythm in the first Test in Manchester.
Under leaden skies, Shaheen Afridi opened the bowling for Pakistan, and was centimetres away from claiming a wicket first ball as an edge from Rory Burns fell just short of second slip.
Three balls later though, Shaheen produced an even better delivery, swinging and seaming away from the initial off stump line, and this time Burns' edge carried comfortably to slip.
Dom Sibley's first ball, delivered by Mohammad Abbas, bounced sharply off a length and hit the right-hander on the hip, causing discomfort for the England opener, but he and Crawley managed to stick it out against some testing bowling from Shaheen and Abbas.
Only another five overs of England's innings were bowled before the weather closed in and forced play to be suspended, and eventually abandoned. The final day of the Test will begin with England on 7/1 in their first innings, and barring something exceptional, the draw looks the most likely outcome.