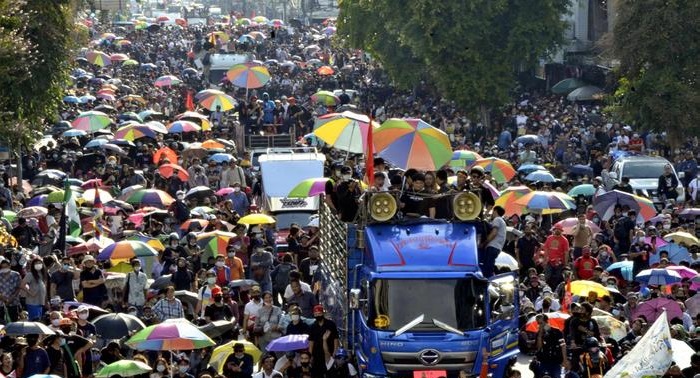 Thai police said on Monday that they had ordered an investigation into four news outlets and restricted access to the messaging app Telegram under emergency measures imposed last week, seeking to curb protests against the government and monarchy.

"We received information from intelligence units concerned that parts of the content and distorted information have been used and disseminated to cause confusion and instigate causing unrest to society," police spokesman Kissana Phathanacharoen told a news conference.

The announcement spurred anger from media groups and accusations that Thai Prime Minister Prayuth Chan-ocha's government was engaging in censorship.

According to a police document dated October 16, investigations have been ordered into content from four media outlets, as well as the Facebook page of a protest group.

The order calls for blocking access to the online sites of Voice TV, The Reporters, The Standard, Prachatai and Free Youth, and removing their existing content.

Under existing laws, the National Broadcasting and Telecommunications Commission and the Ministry of Digital Economy and Society are empowered to ban broadcasts and block internet content. Police can also do so under the emergency decree, which went into effect on October 15, a day after protesters heckled a royal motorcade.

All of the outlets have been broadcasting live coverage of the protests. Voice TV and Prachatai are openly sympathetic towards the demonstrators, while Free Youth is a student protest organization. As of Monday, none of the outlets had been blocked.

Protesters have said that Prayuth, who led a 2014 coup to topple the elected government, was handed power unfairly in last year's election because laws had been changed to favor a pro-military party.

The movement became particularly heated when protesters began demanding reforms of the monarchy — an institution protected by an outdated lese-majeste law, meaning that insulting the monarchy can be punished with three to 15 years in prison.


Tens of thousands of protesters have taken to the streets in the past week in defiance of an emergency decree that bans gatherings of more than four people, outlaws news said to impact national security, and gives authorities broad power to detain people.

Police said around 20,000 people protested across the capital on Sunday, although activists and local media estimated larger crowds.

As they prepared to demonstrate again on Monday, Prayuth said parliament — currently in recess — would be recalled to discuss how to reduce tensions.

"We support opening an extraordinary session to solve this conflict," he told reporters, calling protesters not to break the law. "I request protesters rally peacefully. The government has already compromised to some degree."

Demonstrators have been calling for the resignation of Prayuth — a former general and mastermind of a 2014 coup — as well as the rewriting of the military-drafted constitution they say rigged last year's election in his favor. On Sunday, rallies spread to at least a dozen provinces outside Bangkok.

In addition to the emergency decree banning protests, authorities have also tried to keep people from gathering by shutting down stations on Bangkok's mass transit lines. Police have also warned that they will take legal action against those promoting protests on social media, including by taking photographs there or posting photos to social media.