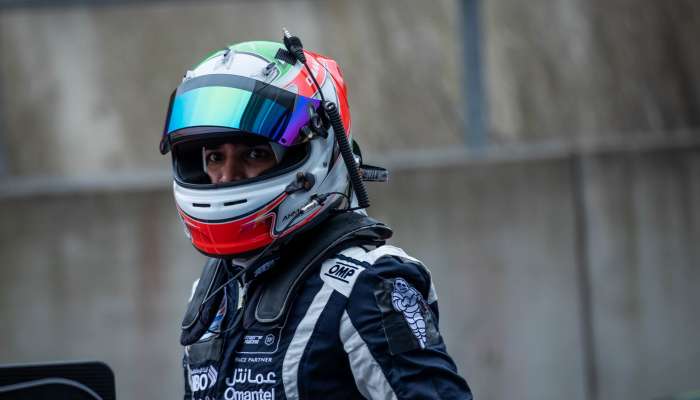 Muscat: Race one Pro-Am class winners Ahmad Al Harthy and Tom Canning experienced a challenging conclusion to their debut weekend in the International GT Open at Spa-Francorchamps on Sunday, October 18, when early delays in the second contest restricted them to a top six Pro-Am finish.
Having enjoyed a spectacular Saturday at the Belgian track, with an overall third place and Pro-Am victory in the No.97 Aston Martin Vantage GT3, the Oman Racing drivers had to settle for a less satisfying sixth in class and 10th overall after Al Harthy was badly held-up during his stint. Added to that, the duo had to contend with a 10 second ‘success’ penalty in the pit-stop from day one’s result.

Starting Sunday’s 60-minute race fifth in Pro-Am and ninth overall, the Omani was edged back a place off the rolling start at the beginning and spent the entirety of the first half hour stuck behind Brendan Iribe’s McLaren.

Despite being visibly faster than Iribe lap after lap, significantly so through the more technical parts of the track, the greater straight-line speed of the McLaren meant Al Harthy was staring at the car’s rear wing throughout his stint. Without taking an unnecessary risk, there was no way to pass safely.

“It was to be expected race two was always going to be much more difficult for us after the success penalty given to us from race one”, said the Oman Ministry of Culture, Sports and Youth, National Bank of Oman, Omantel and Barr Al Jissah sponsored racer, “After getting stuck behind the McLaren from the start, there was nothing we could do without taking any big risks.

“It was very fast on the straights so even though we were much quicker over the lap, it was able to stay ahead. There was no point risking anything, we were here this weekend to gain experience and we showed in the first race on Saturday what we were capable of. It’s been a very positive weekend for Oman Racing, going home with a Pro-Am win and a double podium from Spa is fantastic.”

Al Harthy contested the qualifying session to determine the race two grid at an overcast Spa on Sunday morning and prior to a mid-session red flag stoppage he was third in Pro-Am and sixth overall. After the resumption, the Omani improved his time with a best lap of 2m16.511 seconds on the penultimate tour but ended the session fifth in Pro-Am and ninth overall.

Taking the opening stint of Sunday afternoon’s 60-minute race, Al Harthy got away cleanly at the rolling start but was edged back to 10th overall and sixth in class through La Source. Bottled up behind Iribe’s McLaren, with the Oman Racing driver clearly capable of lapping much faster, Al Harthy lost significant time over the first few laps – almost 10 seconds by the end of lap four.

Swarming all over the back of the McLaren, consistently just 0.2 seconds shy, the Oman Racing driver pressured hard and tried everything to get ahead. Some overtly defensive driving from Iribe resulted in questionable lines, making Al Harthy’s task infinitely harder.

As the first half an hour neared its conclusion, Al Harthy pitted at the earliest opportunity and handed over the Aston Martin to Canning at the end of lap 11. After serving an extra-long stop due to the success penalty from race one, he joined the race with around 32 minutes remaining and was fifth of the entries to have pitted, before passing Jens Liebhauser.

When all pit-stops had been completed, with less than 25 minutes left in the race, Canning was 10th overall and sixth in Pro-Am some 10 seconds shy of the car ahead. With the large gap, any likelihood of gaining places was realistically down to whether any retirements or issues for others would occur.

During the last 10 minutes some rain started to fall and Canning was able to close as a result on the car of Marcelo Hahn, just 0.1 seconds shy at the chequered flag. When in clear air, the pace of the No.97 Aston Martin was obvious with the fifth fastest lap of the race – a time of 2m18.067 seconds.