An Omani woman gets PhD degree after a long struggle 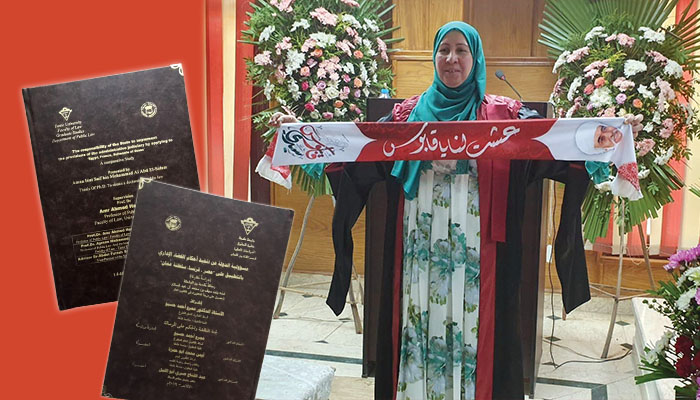 When Amna Saif Mohammed Al Abdulsalam from Saham left primary school to take care of her family, she had no idea what her future had in store. Though she worked as an affairs coordinator in an elementary school for girls, she never gave up on her dreams ... that is to finish her studies. Amna, who recently acquiredher PhD, was all smiles as she recalled the struggles she had faced in her journey so far.

“I studied until Grade VII and then had to leave school to take care of my family as I got married at the age of 13. Later I worked as an affairs coordinator in an elementary school where I met many lady teachers who really worked hard to teach their students. I wanted to be better than them. I saw the students working hard at every level till they joined colleges and universities to attain higher degrees. They were treated with immense respect by all. So I started nurturing the idea of completing my studies,” Amna said.

Amna got married when she was 13 years old and after she  lost her husband she raised her son all by herself. She had to work to support her son.  “I brought up my son with lot of ambitions, moral values and principles. Today he is studying in Egypt to become a police officer,” she said.

In 2006, Amna decided to study law and political science. “One day while watching Egyptian movies that had court sessions and showed how to defend the rights of the oppressed and protect them from any threat  I got deeply interested in the subject,” she added.

Amna’s father and son supported her a lot in her journey and with a general diploma in secondary education she went to Egypt to pursue her studies. Initially the university denied her admission to study law, so she studied history, which she didn’t complete.
“During that period my father died. In 2006 my son was studying his first year in the Police College and during the same time I completed all procedures to join the Law College. The university finally agreed.

“My son used to teach me when he returned from his college. I studied hard and I overcame all difficulties, whether physical or emotional. My salary was only OMR 25, so I suffered financially, as well and had take a home loan to provide a house for us after my husband’s death,” Amna said.

In 2009, Amna got the the license of Law and Political Sciences from the Beirut Arabian University. In 2013-15, she completed her Masters in Law from Tanta Universty. “When Chief Prosecutor Hussein Al Hilali learned that I had a Master’s Degree, he and some officials insisted that I complete my PhD. I completed the procedures in 2017. I started my PhD in January 2017 and completed in September 2019,” Amna said with pride.

“I got my Bachelor’s Degree in Law with an acceptable rate, a Master’s Degree in Administrative Law and General Law with a good rate, and a PhD in Public Law with a privilege rate. I have been working with the Public Prosecution Authority since 2012, and I am currently the Acting Director of Implementation Affairs and Follow-up of Judgments in Batinah North governorateI dedicate this success to the late His Majesty Sultan Qaboos Bin Said Bin Taimur, to the current His Majesty Sultan Haitham Bin Tarik, and to Hussein Ali Al Hilali, who supported each employee and has encouraged us to become someone successful.

"His encouragement was a great incentive for me to complete my studies. I dedicate this achievement to my son who supported me and made the way easier for me. He is now working in Royal Oman Police at the rank of a captain. I feel proud of what I have achieved and accomplished, and that I have been able to serve my country by fulfilling my dream of studying law, and always taking the path of honesty.  My family and friends also share the joy and pride of this achievement with me, despite the difficulties I have faced in the journey,” said Amna.