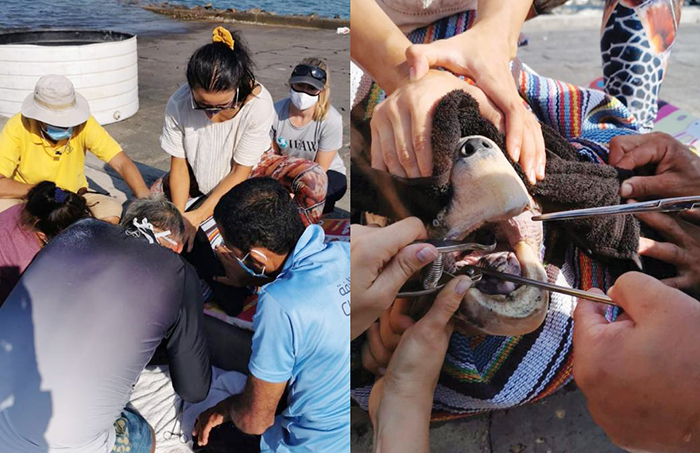 The Environment Authority, represented by the National Task Force, saved the Loggerhead Turtle's life by performing a surgical operation to remove a fishing. Photo: Supplied

Muscat: Timely action by the specialists of the Environment Authority (EA) saved the life of an endangered Loggerhead Turtle. With a fishing hook stuck inside its mouth, the turtle was struggling for its life.

The Environment Authority, represented by the National Task Force,  performed a surgical operation to remove the fishing hook and saved its life.

Engineer Aida Al Jabriya, a marine environment specialist, said that his team received a report from Qantab Water Sports Company about the presence of an injured Loggerhead Turtle.

The team immediately shifted the turtle to the port of Seeb and placed it in a basin until the arrival of veterinarians from the Omani Wild Animal Breeding Centre at the Diwan of Royal Court.

With the help from the Five Oceans Environmental Consulting Company the operation was carried out and the turtle was released after its health check-up.

A number of sub-teams have been formed in the governorates comprising specialists and wildlife monitors to collect and document data on mammals and sea turtles living near their coasts. It is the responsibility of each group to compile reports, examine samples, and provide equipment to dispose of animal carcasses.

Al Jabriya added that the project aims to analyse the threats to mammals and sea turtles from encroachment, and help in saving their lives. The teams will also monitor sites, study the causes of displacements of these animals and determine potential threats to their lives in each area.