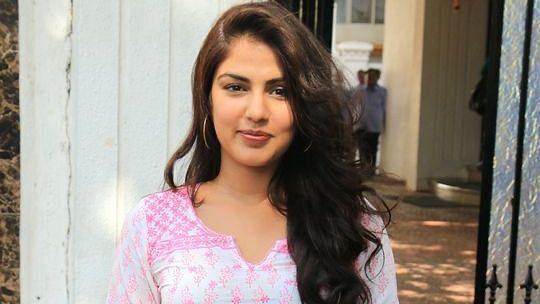 "Actor Rhea Chakraborty arrested by Narcotics Control Bureau in Mumbai," said KPS Malhotra, Deputy Director, NCB. She is the ninth person arrested in the ongoing case by the NCB.

Earlier in the day, Chakraborty reached NCB office in Mumbai for the third consecutive day for interrogation.

Her brother Showik Chakraborty and her associate Samuel Miranda have also been arrested in the same case. Both of them have been sent to the NCB custody till September 9.

In her complaint to the Senior Inspector of Police, Bandra Police Station, Chakraborty stated that Priyanka Singh had sent Rajput a prescription by Dr Tarun Kumar and he "appears to have prescribed medication controlled under Narcotic Drugs and Psychotropic Substances Act, 1985 to Sushant without any consultation as mandated by law."

The case filed on the complaint of actor Rhea Chakraborty had been transferred to the Central Bureau of Investigation (CBI) as per the orders by the Supreme Court, according to the Mumbai Police on Tuesday.

"As per the complaint of Rhea Chakraborty, a case had been registered at Bandra police station under sections of IPC, and NDPS Act. In line with the orders by the Supreme Court of India, the case has been transferred to the CBI for further investigation," Mumbai Police spokesperson, N Ambika said.

The CBI has registered an FIR against Chakraborty and others in connection with the actor's death.

The Enforcement Directorate had on July 31 registered an Enforcement Case Information Report in the late actor's death case after an FIR was filed by Rajput's father KK Singh against Rhea Chakraborty in Bihar on July 28.

Rajput was found dead at his Mumbai residence on June 14.