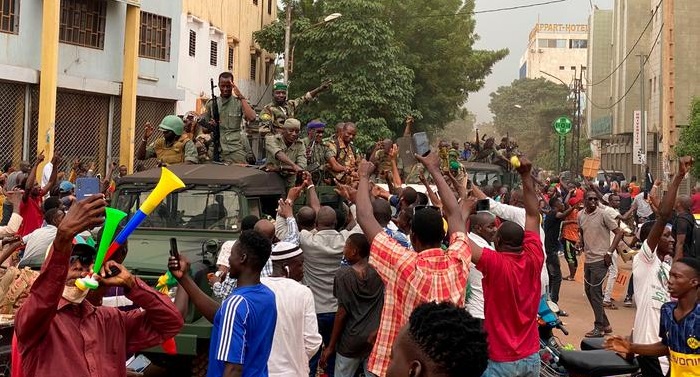 "I have decided to quit my functions, all my functions from this moment ... I declare the dissolution of the National Assembly and the government," Keita said in a brief declaration broadcast by national television ORTM.

"I wish no blood to be shed to keep me in power," he said, adding that he didn't "hold any hatred" towards anyone.

Leaders of the military coup said Wednesday they would enact a political transition and stage elections within a "reasonable time."

The National Committee for the Salvation of the People (CNSP) "decided to take responsibility in front of the people and of history," Ismael Wague, the Malian Air Force deputy chief of staff, said in a state television broadcast.

The Economic Community of West African States (ECOWAS), the African Union, the European Union and the United Nations, along with France, condemned on Tuesday afternoon the arrest of Keita by the mutinous Malian soldiers and demanded restoration of the constitutional order, affirming that they would not accept an unconstitutional power switch.

United Nations Secretary-General Antonio Guterres on Tuesday called for an immediate restoration of constitutional order and rule of law in Mali after the country's president was arrested.

ECOWAS issued a statement Tuesday evening, threatening to sanction authors of the mutiny.

In the statement, ECOWAS announced its decision to suspend the membership of Mali, and asked its members to close borders and suspend all financial connections with the country.

A source from the defense ministry said an officer reportedly took advantage of the morning rally to incite soldiers to revolt.

For months, opposition coalition the Movement of June 5 - Rally of Patriotic Forces (M5-RFP) has been organizing demonstrations to demand Keita's resignation, accusing him of being responsible for the worsening security situation in the northern part of the country and Mali's economic recession.

The coup occurred as M5-RFP on Tuesday began a week of "continuous activities" of protest in Mali to force Keita to resign. Keita was first elected president of Mali in 2013 and re-elected for another five-year term in office in 2018.

In 2012, a military coup which overthrew former President Amadou Toumani Toure a few months before the end of his mandate, also began with a mutiny in the military camp in Kati.