MMG to say goodbye to one of its longest-serving employees 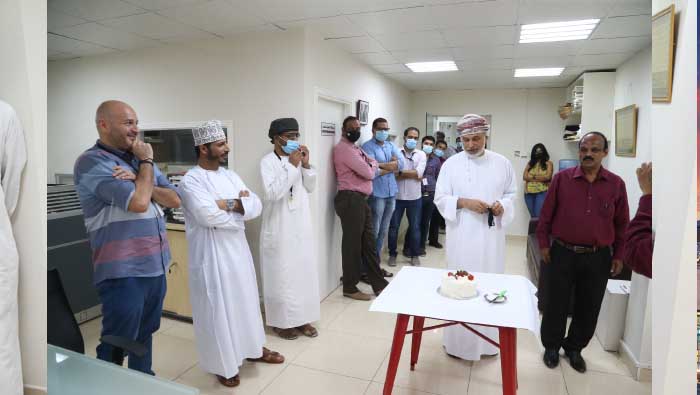 Muscat: Muscat Media Group (MMG) will soon bid a fond farewell to one of its longest-serving employees, who has been with the company for more than 38 years.
64-year-old Uday Kumar now plans to return to India, after having worked for MMG and its affiliates, since joining the organisation on 2 December, 1982.
Like many expatriates who come to Oman to make a living and send money back home, Uday too came to the Sultanate to provide for his family. A year after arriving in the country, Uday found work at Essaco, the holding company set up by the founder of Times of Oman, the late Essa bin Mohammed Al Zedjali.
“When I first came here, I used to work for my brother’s company. But a year later, I found a job at Essaco – a person from my hometown was able to find me a job there,” recalled Uday, who hails from Kozhikode in the Indian state of Kerala.
Uday worked as an office boy, but to call him that would be to belittle the tremendous service he’s done for the Muscat Media Group: he has, in a way, been the glue that has held together the offices here just a little more tightly, seeing to everyone’s needs and always on hand to assist wherever he was able to.
Always on hand to provide people a refreshing pick-me-up in the form of a freshly-brewed cup of tea or coffee, to look after the many high-profile visitors who walk into the MMG offices, and doing what is asked of him with an ever-present smile, have earned Uday much love from the rest of the company. His dedication, hard work and sincerity will be sorely missed when he does leave.
Turning up to work at 7:30am, while many of us have only just begun our morning routines, Uday has, for nearly 38 years, made sure he is able to help the company run smoothly. To walk into the building and be greeted by his cheerful smile has lifted the spirits of many who’ve entered MMG’s head office.
“Whatever help people ask of me, I try to provide that to them,” said Uday. “When they come to work in the morning, many of them ask me to give them some tea or coffee, or a bottle of water, and I am always there to help them. Before the days of the photocopy machine, we used to have a big telex roll on which we used to get news.
“There was a typewriter machine that used to print the news onto the telex role,” he added. “It was a long, continuous piece of paper on which all the news used to be printed, so I had to cut the paper according to the length of each story and place it on the editor’s desk.”
Although Uday now lives on his own in Oman, he did have his family here with him for a long time, before they decided to relocate back home. He is forever grateful for the opportunity given to not just him, but also to his son, who used to work in the company’s printing press before returning to India.
“Oman is a country that has been very good to me,” recalled Uday. “I will never forget that Mr Essa also gave my son a job in his company’s printing press. There is no one best memory for me, because I have had so many positive experiences with all the people I have met while working here. I am very glad that everyone found my work to be good.”
He is still undecided on what he wished to do next, but Uday is planning to take a well-earned break for a while, during which he will consider where he goes from here.
“I was very touched that the company gave me a big farewell party, all the staff came to wish me well,” he said. “The chairman also gave me a very nice gift.”
Uday understanding the value of hard work and dedication earned him the respect of many, both within the company, and outside, and he feels the current generation must understand the importance of these qualities.
“People today need to realise the importance of hard work, because that will help them a lot,” he said. “All that I have done today has been because I have worked hard, and if you do the same, you will be successful.”