North Korea to restart military exercises on border with South 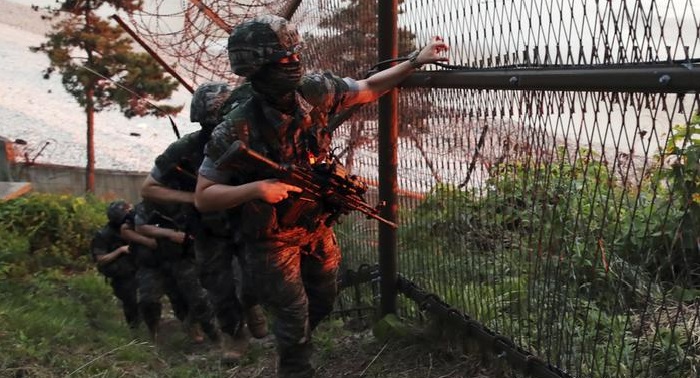 North Korea's army will restart military exercises on the South Korean border in demilitarized areas that were previously used by both nations for industry and tourism, North Korean army leadership said Wednesday.

Citing the army, state media reported that troops would be sent to the industrial park in the border town of Kaesong and to the Kumgang Mountains on the east coast.

Guard posts in the demilitarized buffer zone between the two countries will be reestablished, it added.

The plan out of Pyongyang came a day after the North blew up an inter-Korean liaison office on its territory in Kaesong, the latest escalation of a conflict over a leafleting campaign by defectors and activists in South Korea.

North Korea said it was rejecting South Korea's offer to send a special envoy on a de-escalation mission.

"If the North actually takes such a move, it will certainly pay the price for it," Jeon Dong-jin, director of operations of South Korea's Joint Chiefs of Staff, said according to Yonhap.

Kim Yo Jong, the powerful sister of North Korean leader Kim Jong Un, called out the South for making a "tactless and sinister proposal" in its offer to send an envoy, according to a statement reported by North Korean news agency KCNA. Seoul must "take proper actions in return and calm down, strictly controlling words and acts of thsoe fools who keep provoking us," the statement said.

Anti-Pyongyang activists in South Korea had sent around half a million leaflets denouncing the North into the country at the end of May.

Relations between North and South Korea have been at a standstill since a nuclear summit between the North and the US fell apart last year.