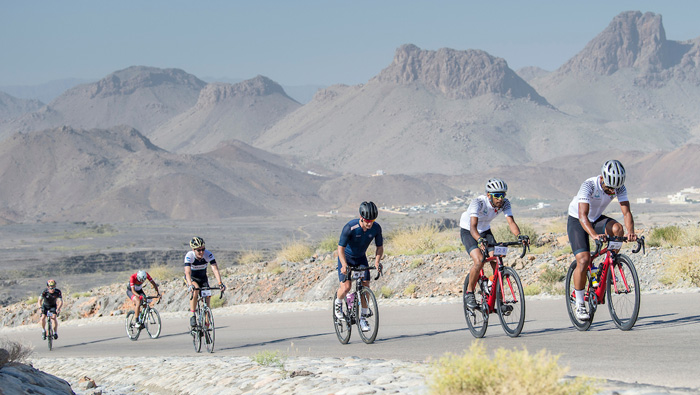 Muscat: Stage 2 of the 2020 edition of Haute Route Oman hit its stride on Saturday with a field of 120 amateur cyclists from 28 countries taking on another challenging course in the heart of Oman’s famed Al Hajar mountain range.

Following on from the daunting opening day climb up Jebel Akhdar, the second stage of the three-day adventure saw riders set out from Golden Tulip Nizwa on a long 144km route with a further demanding ascent, this time the 23km Hoota climb to the 3100m high summit of Jebel Haat.

The cycling peloton was treated to spectacular views and a ride through lush plantations and a mystic old town in Tanuf on the road to Hoota. With lighter winds than the first day, and warmer riding conditions, the field hit high speeds and a faster than expected pace on the approach to Jebel Haat, and also on the return section to Nizwa following the climb.

“On the running to the finish line, we had a good gap in the group just before the last climb and the lead had swapping turns which led to getting us to the finish together”. Describing the joy of reaching the peak of Jebel Haat, Colin added, “It was another awesome climb with a terrain and views different from yesterday. Today definitely felt very racy and dynamic. It was a fantastic contrast to Stage 1.”

Shubert, who participated in the first edition of Haute Route Oman said, “I am primarily a time-trialist but I thought I would instigate something different today launching an attack from the start. I saw Collin disappear up the last climb. I stopped for a while, but then carried on to jointly come to the finish. Thinking beyond racing, he said, “It is nice treat to see the spectacular panorama looking down at the canyon from the peak of Jabal Haat”.

In the women classification, Stage 2 saw Ireland’s Eimear D’arcy in the leading position, followed by Britain’s Jessica Upton in 2nd place by a 3-minute difference, then Finland’s Laura Patrikainen in third place yet still leading the overall classification. Patrikainen thought the stage was challenging but she is happy to still maintain the overall lead, “The start was very fast and I had my plan not to go to the red zone in the beginning which turned out to be a mistake. I paced myself and after a while I managed to find a good group”. Looking ahead to extend the lead, she added, “It is looking very good for me tomorrow. Am just going to go full gas. Time trial is my strong suit”.

On the local side, the stage saw Mohammed Al Wahaibi, the youngest rider in the event and one of 15 racing of the Daleel Petroleum group, come 5th in the stage overall results.