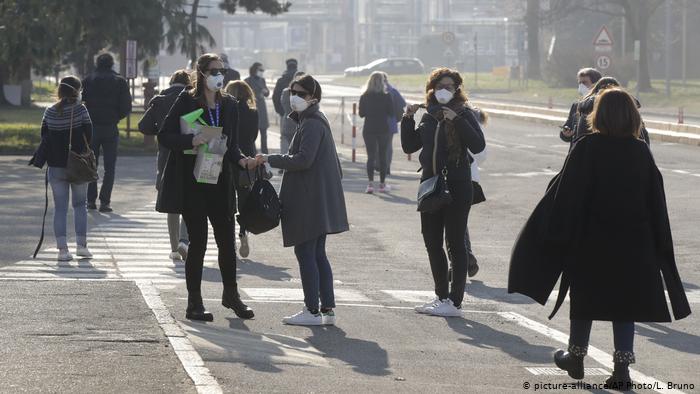 The Italian government on Saturday said it was considering "extraordinary measures" to fight the coronavirus following the deaths of two citizens. Several major sporting events have already been postponed in the north of the country.
The outbreak has also caused Italian authorities to place several towns on lockdown amid an increase in the number of cases to almost 80, as well as the two deaths reported on Friday and Saturday.
The death of a 75-year-old woman on Saturday near the small town of Codogno in Lombardy came just a day after a 78-year-old man succumbed to the virus in the neighboring region of Veneto, marking the first deaths in Italy.
Prime Minister Giuseppe Conte expressed his sympathies for the two who passed away and said he had called an emergency meeting, as more than 50,000 people from about a dozen towns in two northern regions were asked to stay at home by authorities.
Growing cluster of cases
The cluster was located in a handful of small towns in the Lombardy region, according to the head of regional health, Giulio Gallera.
The first to fall ill from the virus was a 38-year-old Italian who met with someone who had returned from China on January 21, health authorities confirmed.
The 38-year-old is now hospitalized and in critical condition. His wife and a friend of his have also tested positive for the coronavirus.
Tests were being administered on the 38-year-old's doctor, who paid him a home visit, as well as on 120 people he worked with in the research and development branch of Unilever in the town of Casalpusterlengo, Gallera said.
Three patients at the hospital in Codogno, where he went with flu-like symptoms earlier this week, have also been infected, as have five nurses and doctors.
Another three people, who frequented the same cafe in the Lombardy region, also tested positive on Friday, in addition to the eight people at Codogno hospital, Gallera added.
Scare reaches Milan Fashion Week
A dozen towns in northern Italy are now effectively in lockdown after a growing cluster of cases were reported with no direct links to the origin of the outbreak abroad. Streets were deserted, along with signs of closure outside public buildings.
Italian designer Giorgio Armani announced early Sunday that, due to the health risk, his fashion house would hold its Milan Fashion Week runway show behind closed doors.
"The decision was taken to safeguard the well-being of all his invited guests by not having them attend crowded spaces," the fashion brand said in a statement.
Fashion week runway shows took place in Milan on Saturday for the fourth day in a row. Eight more shows are scheduled for Sunday, thought it was unclear if all would be held as planned.
Restaurants, schools, emergency rooms closed
The spike in cases also prompted regional authorities to order the closure of schools, businesses and restaurants in Veneto and Lombardy, as well as cancel sporting events and religious services.
The prime minister announced Saturday evening that the sports ministry was suspending all sporting events, including three Serie A football matches scheduled for Sunday in the northern regions of Veneto and Lombardy. Inter Milan's game against Sampdoria was one of those postponed due to the outbreak.
"I am sorry for fans of football and other sports who were planning to go to the matches scheduled tomorrow but citizens need to be responsible," Conte said.
More than 40 amateur and youth matches in the regions were canceled on Saturday over coronavirus fears.
The mayor of Codogno ordered all restaurants, schools and public gathering spots, such as discos and gyms, to be closed. The Health Ministry also advised residents to stay at home as a precautionary measure.
The Codogno hospital closed its emergency room, and staff were seen wearing masks as movers brought in new beds and furniture as the quarantine got underway.
In Casalpusterlengo, a large electronic message board outside the town hall read "Coronavirus: the population is invited to remain indoors as a precaution." Local officials in the northern Italian town ordered the closure of local schools closed through Tuesday.