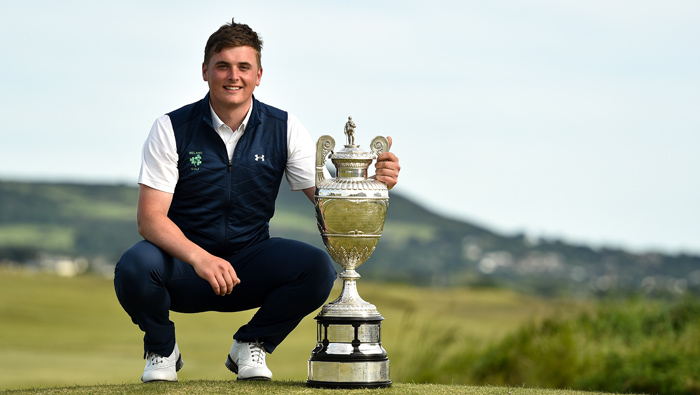 Sugrue, who clinched the most prestigious title in the amateur game at Portmarnock Golf Club, plans on turning professional later this year after his Oman Open debut and scheduled outings at The Masters and the US Open, and he’s thrilled to be given the opportunity to play alongside European Tour professionals in Oman.

“I’ve never been to the Middle East before and making my first trip there to play the Oman Open will be a great experience,” said Sugrue. “My coach was talking to me about the golf course at Al Mouj Golf and saying how windy it can get.

“We get a lot of wind over here in Ireland and I have experience of playing the amateur tournaments and championships which are generally played on links courses, and although I don’t mind playing in the wind, I’d probably prefer if it wasn’t really strong.

“But, that being said, I am used to it. The weather is never perfect every day you go out to play so you’ve just got to deal with the conditions you’re faced with.”

Sugrue overcame Scotland’s Euan Walker on the final green of a 36-hole final last summer and with it earned an invitation to play The Open at Royal Portrush.

“Apart from last year’s Open, this year’s Oman Open will be my first taste of a proper European Tour event, so I’m looking forward to it,” he said. “For me to travel to Muscat and play with veteran players, share the locker room with them, eat with them, it’ll be great. Hopefully as an amateur going over there it might help inspire the up-and-coming players in Oman. It’s a great opportunity for me.”

The 22-year-old believes he is well equipped to take on the challenge that the Greg Norman-designed course at Al Mouj Golf presents.

“I’m usually pretty good off the tee - that’s my main strength and my friends, and other players who know me, would probably say the same,” he said. “I’m usually reliable with my driver and mentally I think I’m quite strong and laid back on the golf course. I don’t really get too worked up about things and try and take things in my stride a little bit.”

Jamie Wood, Championship Director, Oman Open, said: “We are delighted to offer James an invitation to this year's Oman Open. His performance in winning the Amateur Championship last summer was superb and his determination and ability were there for all to see.

"The Oman Open is committed to giving a platform to amateur talent and we hope that young amateur golfers in Oman, including our Junior National Team players, are inspired by seeing the opportunity that he has been given to compete against the best players on the European Tour. We look forward to welcoming James to Oman and hopefully the experience of playing in the Oman Open will help him to prepare for his upcoming appearance at The Masters.”