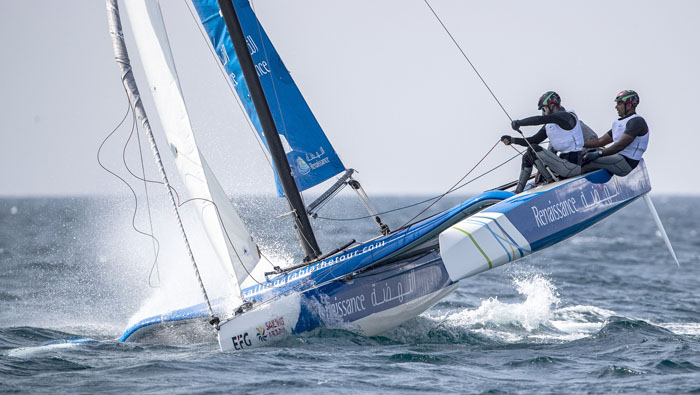 Salalah: French and Omani outfit EFG Bank is on top of the overall table following the first of five stages of the 2020 edition of EFG Sailing Arabia – The Tour.

The tenth edition of EFG Sailing Arabia – The Tour is underway, following a fast and competitive opening stage in Salalah, Oman.

The conditions on the opening day of the race quickly blew out any cobwebs, with the eight crews facing tricky conditions as they raced their DIAM24 trimarans raced off the white sandy shore of Salalah.

2020 EFG Sailing Arabia – The Tour Race Director Gilles Chiorri said: “The sea was flat, which suits the DIAM24, but the wind was very inconsistent. We had big shifts, probably 25-degree wind shifts, and at the lightest we probably had 10-12 knots and the strongest was about 24 knots. So, it was very challenging for the crew. They had to be very reactive and opportunistic and as a result we saw some very good racing.”

It was EFG Bank who handled the conditions best, finishing the opening day of racing with three wins and three second places in the five stadium races and one coastal raid staged.

French Olympian Sofian Bouvet, Skipper of EFG Bank, said: “I am very happy with this opening first stage. My team hasn’t had a lot of experience together so it is very pleasing to start this way. Our aim now is to continue the momentum and take the same spirit into the next stage in Duqm.”

Adverse conditions resulted in racing being cancelled on day two, leaving EFG Bank on top of the overall leaderboard on 8 points. The all French team Groupe Atlantic, managed by two-time defending EFG Sailing Arabia – The Tour champion Pierre Mas, is in second place, 3.5 points behind EFG Bank, while the all-female DB Schenker team is third overall.

DB Schenker Skipper Audrey Ogereau, who is joined in the team by Swiss sailor Laurane Mettraux, and Omani pair Ibtisam Al Salmi and Marwa Al Kaifi, said: “It was a tricky first day. The wind was quite strong and shifty and around 20 knots but we did really well. The girls were a bit tired by the end of the day but after six races we were still really competitive so it was really well done by the whole team and we are very happy to be third in the rankings.”

A total of eight teams are taking part in the 2020 EFG Sailing Arabia – The Tour, made up of sailors from Oman, France, Switzerland, and Spain. Over 15 days from 26 January-8 February, the teams will race onboard a fleet of DIAM24s in five diverse and beautiful locations along the Omani coastline.

From Salalah, the teams will travel 600KM north to the port city of Duqm for two days of racing from 29-30 January. Following Duqm, the 2020 EFG Sailing Arabia – The Tour will continue to make its way up the Omani coast, stopping in Masirah Island and Sur, before holding the championship deciding two days of racing in Muscat on 7-8 February.