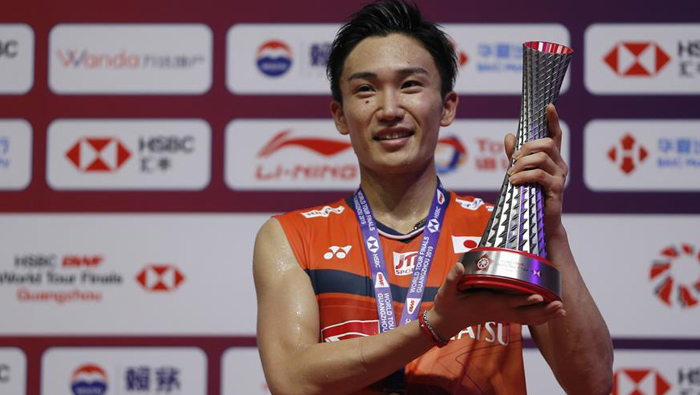 Momota, who was honored with the BWF Male Player of the Year Award, has won a total of 11 titles this year including the world championships.

Ginting took the first game by winning four consecutive points after 17-17, but Momota withstood the pressure to score four points in a row after 15-15 and cruised to victory in the second game.

From 12-all in the decider, Ginting appeared tired while Momota controlled the rhythm for the final victory by 21-14.

"In the decider, I was really tired and hoped to win the match as soon as possible. But my opponent was flexible in his style, so I seek to be patient enough for these long rallies. Finally, I won it with my patience," said Momota.

The Japanese had an outstanding season during which he won most of the major titles, including the World Championships, the badminton Asia Championships, and the All England. He also guided Japan to the Sudirman Cup final.

After surpassing Lee Chong Wei's 10 titles' haul from 2010, Momota said he would not be satisfied with 11 titles. "I have participated in numerous tournaments this year, which is really tiring. I feel honored for these awards, but I will achieve better results in the future."