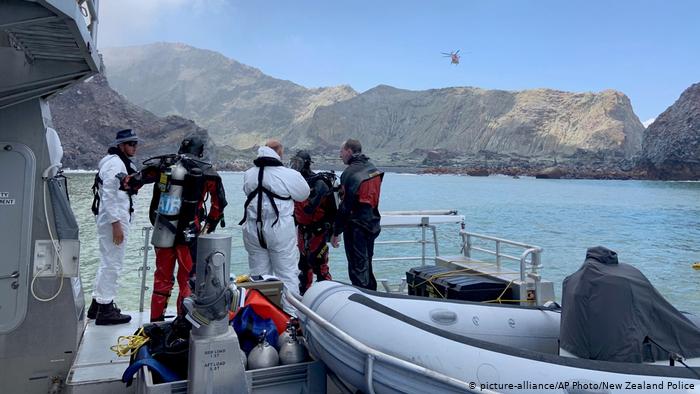 Rescuers returned to the scene of a volcanic eruption at White Island, New Zealand, on Saturday, racing to search for the last two victims of the disaster.

The eruption took place last Monday when 47 tourists and their guides were on an excursion through the island. A total of 16 died in the eruption while 28 were injured, 21 of which were in "very critical" condition.

The two last victims are believed to be New Zealanders, a tour guide and a boat captain.

Police said that rescue teams had seen one of the missing bodies in the water close to the island on Tuesday, the day after the eruption. But the location of the other body is still unknown.

Divers began the search for bodies on Friday and were able to recover six victims, but operations came to a halt due to deteriorating weather conditions.

National geological hazard monitoring system Geonet put chance that another eruption on White Island in the next 24 hours at 35% to 50%.

Authorities are working to identify the victims who were found on Friday. In a statement, police said their own experts, forensic pathologists, scientists, odontologists and coroner's officials were all involved in the identification work.

Prime Minister Jacinda Ardern called for a minute of silence in memory of victims of the disaster at 2:11 p.m. on Monday, exactly a week after the eruption took place.

Ardern and her Cabinet will lead the minute of silence during their regular meeting at Parliament in Wellington.

"Wherever you are in New Zealand or around the world, this is a moment we can stand alongside those who have lost loved ones in this extraordinary tragedy," Ardern said. "Together we can express our sorrow for those who have died and been hurt and our support for their grieving families and friends."

Authorities have said that 24 Australians, nine Americans, five New Zealanders, four Germans, two Britons, two Chinese and a Malaysian were on the island at the time of the volcanic eruption.