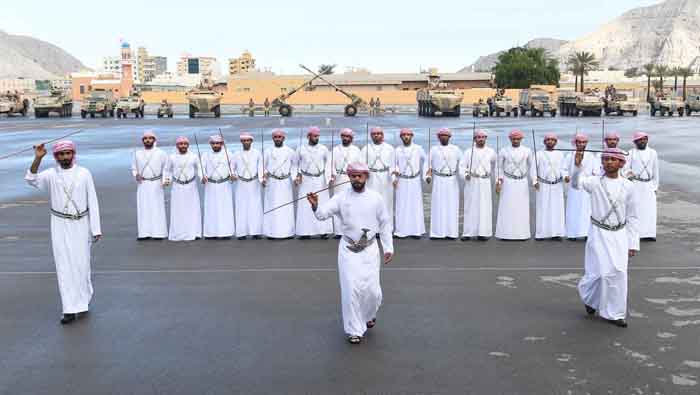 Khasab: Musandam Sector Command at the Royal Army of Oman (RAO) held a celebration on the occasion of the Armed Forces Day, which falls on December 11th every year and the Retirees Day, which falls on December 7th every year, under the patronage of Dr Abdullah bin Mohammed Al Saidi, Minister of Legal Affairs.
The ceremony, which was organised at the Musandam Sector Command HQs, began by playing the Royal Anthem and military salute to the chief guest. Then, the RAO Music Band played various military musical pieces marking the occasion. The chief guest pinned long-service and good conduct medals on personnel at Musandam Sector Command in appreciation of their sincere efforts and dedication in carrying out the sacred national duty.
The ceremony was attended by Sayyid Ibrahim bin Said Al Busaidi, Minister of the State and Governor of Musandam, judges, walis, Musandam Sector Commander, senior officers and officers of the Sultan’s Armed Forces (SAF) and other security departments, sheikhs and dignitaries.