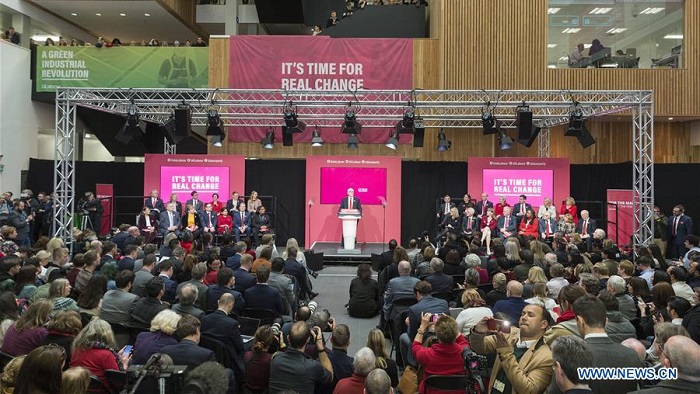 A cut to corporation tax introduced by the Conservative government would also be reversed to help fund Labour's program for change, estimated to cost around 83 billion British pounds (107.2 billion U.S. dollars).

"We can no longer deny the climate emergency. We can see it all around us, as the recent floods in Yorkshire and the east Midlands have shown. We have no time to waste. The crisis demands swift action, but it isn't right to load the costs of the climate emergency on to the nurse, the builder or the energy worker," Corbyn said.

"A Labour government will ensure the big oil and gas corporations that profit from heating up our planet will shoulder and pay their fair share of the burden with a just transition tax," he added.

Hundreds of thousands of public sector workers are promised a five percent pay rise next year to help offset the impact of the one percent pay cap that has been in place for some years.

Political and business commentators have warned that a proposed windfall tax on the profits of oil companies could see the cost of petrol soaring at filling stations.

Labour also wants to lower the voting age from 18 to 16.