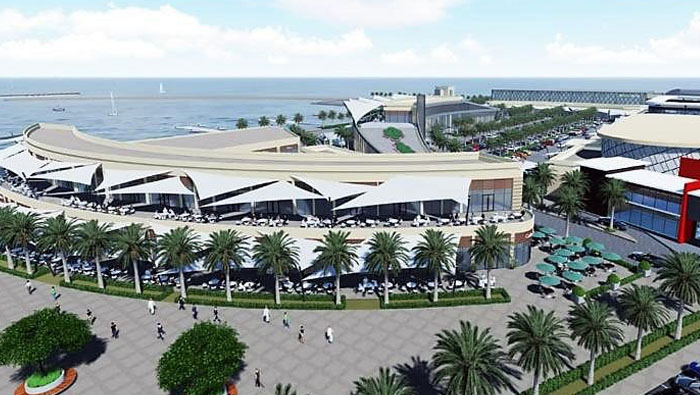 Barka: The Barka Port Development Project (Barka Marina) is one of the most promising projects that serve the economic, tourism, development and operational sectors and supports the Sultanate’s plans for commercial diversification.
The project is a diversified waterfront and one of the typical projects undertaken by the private sector in the Sultanate.
Salim bin Ali Al Siyabi, Chairman of al Siyabi Group (Falcon), the main investor in the project, said: “The investment cost of this project amounted to OMR55 million, and is being built on a total area of 1,336,213 square metres. The actual area of the project is estimated at 115,200 square metres. The building area is 105,000 square metres, the leasable area is 40,000 square metres and 450 commercial units. The project will provide about 2,000 job opportunities.
The project will be opened in three stages, the first and second will be by the first quarter of 2020 and the third by 2022.
Al Siyabi said that the project includes in its first stage a market for fish, poultry, meat and vegetables and its various facilities, including a management centre, cold storages, hypermarkets and an advanced health clinic.
The second stage will include an event hall, a family entertainment hall, a shopping mall (Marina Mall) and cinema halls.
The third stage will include a hotel, resort, residential units, a large yacht marina for eighty yachts, a private beach for the hotel, a coast guard building and a water sport centre.
The project will also include dancing fountains.
Al-Siyabi pointed out that the project includes a tourist resort with a 5-star hotel with a capacity of “185 rooms” as well as hotel apartments, rooms and chalets in the form of an integrated resort as a small city within one area.
Among the many other facilities included in the Barka Port Development Project are a more than 1500 meter lit and planted a walkway, equipped with sports equipment for all ages and playgrounds for children, all of which are used free of charge to be an attraction, and a tourist park that is expected to attract more than 10,000 visitors per day.
Salim bin Ali al- Siyabi, Chairman of al- Siyabi Group (Falcon), pointed out that the priority of investment in the project will be for the owners of small and medium-sized companies from the citizens of the Wilayat of Barka and the Governorate of South Al Batinah, adding that the project will include the largest gold market, which will be unique.
It is worth mentioning that the project, upon completion, will be a model for the modern city, and will be an outlet for families and visitors from inside and outside the Sultanate to spend time for rest and recreation.
This project will provide a lot of entertainment and at affordable costs, in addition to its diversity and distinctive location and beautiful sea views.