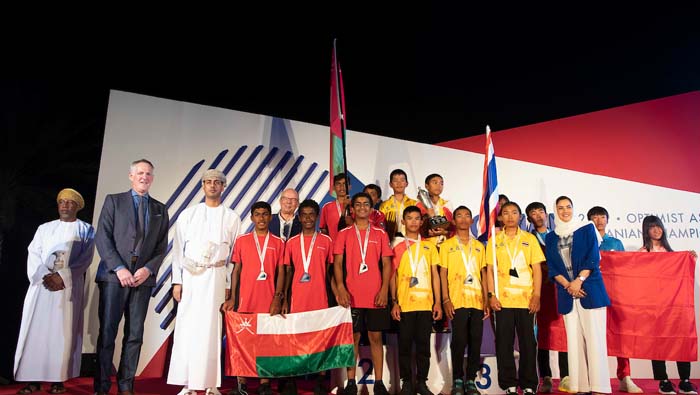 Muscat: A highly competitive 2019 Optimist Asian and Oceanian Championship came to an end in Oman on Sunday with a celebratory prize-giving and closing ceremony at Mussanah Sports City.

The hard work and skills of the 146 sailors from 21 countries who had gathered in the Sultanate for the high-profile International Optimist Dinghy Association (IODA) regional event were applauded as trophies were awarded.

Thailand lead the way with Panwa Boonnak the 2019 Optimist Asian and Oceanian champion. He topped the overall and gold fleet table ahead of his teammate Weka Bhanubandh, with Brazil’s Guilherme Menezes completing the podium.

Six members of the Oman home team finished in the top-25 overall, with Saleem Al Alawi the best placed in seventh while Mohammed Al Qasmi took two race wins on his way to 11th place. A total of 10 of Oman’s 16-strong team qualified to race in the top gold fleet over the last two days of the Oman Sail hosted and organised championship.

Earlier in the event the Oman squad had also been able to celebrate qualifying for their first ever Team Racing Championship final, going to head-to-head against Thailand with the Thai team successfully defending their 2018 Asian title to win for the second successive year. Australia was the winner of the Oceanian Team Racing title.

Speaking at the prize-giving and closing ceremony in front of VIPs, the sailors, and their coaches, family and friends, Oman Sail CEO David Graham said: “It has been our pleasure to host some of the world’s most talented youth sailors here and to watch the beginnings of what I’m sure will be long and successful careers in sailing.

“Sport has an immense power to unite people from different backgrounds and this event extends far beyond sailing – it is an opportunity to embrace different cultures, create new friendships and develop skills that can last a lifetime. I would like to thank the young sailors for their amazing displays of sailing and sportsmanship this week. The event has given our young Omani sailors an opportunity to sail against the world’s best, and represent their country. We are so proud of their progress and commitment to the sport.”

Closing the championship IODA Vice President Ajay Narang oversaw the flag ceremony which saw the IODA flag passed from Oman to Sri Lanka, who will host the 2020 event.

He said: “This championship will leave a great legacy in Mussanah and around the Sultanate of Oman. The sailors made us proud and have learnt what it means to be true champions. They have shown us that a new generation is ready to embrace and share the values of the sport.”