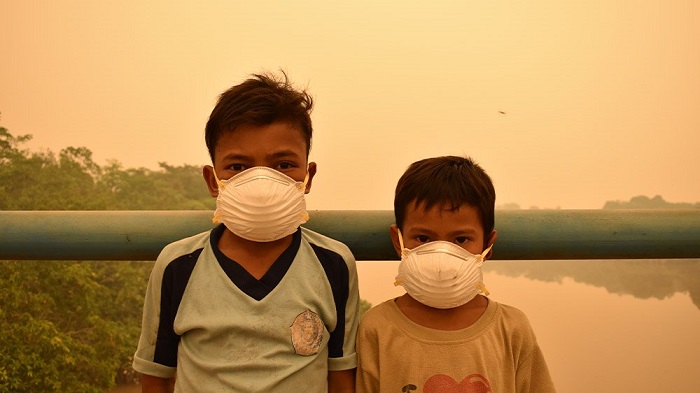 Kuala Lumpur: A toxic smog settled over Malaysia and Singapore for most of September fuelled by fires that had been raging in neighbouring Indonesia for weeks.

Schools were forced to close, N95 masks to filter the polluted air’s most dangerous particulates were rationed, and doctors reported a surge in patients with respiratory illnesses and eye infections.

But it was not the first time it had happened. Not even the second, or the third.

The haze, as it is commonly known, has been blanketing the region on an almost annual basis since 1997.

"What I’m really worried about is long-term malignancy," Dr Amar Singh, a senior consultant paediatrician based in the Malaysian city of Ipoh, said.

"It’s like the entire country is smoking cigarettes. You can stay in your home, but you are still going to breathe in the particulate matter."

As environment ministers from Southeast Asia gather for a three-day summit in Siem Reap, Cambodia beginning on Monday, the issue takes the spotlight following the recent haze in the region.

Originating in fires on the peat-rich islands of Borneo and Sumatra, Southeast Asia’s haze is a potentially carcinogenic cocktail of chemicals including carbon monoxide, cyanide and formaldehyde as well as microscopic particles of ash, wood and other substances that can lodge deep inside the body.

The first incidence of trans-boundary haze coincided with the development of the pulp and paper and palm oil industries in Indonesia and Malaysia, as landowners turned to fire as the quickest and cheapest way to clear the rainforest.

Over the years, the industry has continued to expand, and palm oil has become almost ubiquitous – an ingredient in products from makeup to ice cream and floor cleaner. Malaysia and Indonesia have become the world’s top two producers.

"The haze has become steadily worse and more frequent, roughly reflecting the way land has been opened up for plantations," explained Helena Varkkey, an expert on tropical peatland at the University of Malaya and author of The Haze Problem in Southeast Asia: Palm Oil and Patronage.

She notes much of the converted land is peat swamp forest that has to be drained before it can be used for agriculture.

"The issue is that newly-opened land may be burned or catch fire soon after the drainage stage," she said. "But old land, which has been on fire before, also tends to burn again. So, the problem is compounding year after year."

In the catastrophic haze of 1997, Malaysia was forced to declare a state of emergency in its Borneo state of Sarawak as the air pollution index rose to hazardous levels, while the air in Singapore turned a sickly yellow.

Even the Philippines and Thailand were affected. Close to the hotspots in Indonesia, the air pollution index exceeded the maximum level of 1,000, more than three times the level considered hazardous.

More than 40,000 people were hospitalised as a result of the pollution, and the economic, social and environmental damage was estimated around $9 billion, according to the Association of Southeast Asian Nations (ASEAN).

The burning of 1997 was a wake-up call to governments around the region, which began to take steps towards addressing the blazes, which also contribute towards greenhouse gas emissions as the burning peat releases carbon dioxide into the atmosphere.

The ASEAN Haze Agreement was adopted in 2002 - the same year another bout of fire-fuelled pollution smothered the region - and included prevention measures, particularly in peatlands, monitoring initiatives and emergency response procedures with a goal of achieving a haze-free ASEAN by 2020. A regional fund was also established to help with some of the costs of haze prevention and fire control.

In 2004, the Roundtable on Sustainable Palm Oil (RSPO) was set up, bringing together plantations companies, palm oil buyers, banks and environmental groups to set sustainability standards for the industry.

It has gradually tightened its certification standards and last year added "no peat" to the requirements. About 19 per cent of global palm oil is now certified by RSPO.

Indonesia has also taken steps to address the haze. Using fire to clear forest has been an offence since 1999, with a jail term of 10 years for those found guilty.

In 2011, the country introduced a nationwide moratorium on the conversion of primary forest into plantations and in 2014, finally ratified the ASEAN haze agreement, the last of the organisation's 10 members to do so.

Over the same period, the palm oil industry has become increasingly important to the economies of Malaysia and Indonesia. The edible oil is grown not only by smallholders but also huge conglomerates, some of which have their corporate headquarters in Singapore.

In 2014, the city-state passed a landmark law allowing it to prosecute companies for actions creating haze in Singapore.

The legislation rests on the presumption that if satellite imagery shows a fire within the borders of a company’s concession with the wind blowing in the direction of Singapore, then the haze can be presumed to have come from there.

The investigation into four Indonesian companies for their role in the 2015 haze "remains open", the country’s National Environmental Agency said. It is "monitoring the situation closely" in relation to the 2019 disaster, it added.

For the Singapore Act to be effective, it needs maps and Indonesia’s cooperation.

"A significant part of the haze problem does boil down to politics, the decentralised nature of governance in Indonesia and the lobbying power of the plantation companies, especially at the provincial and regency levels with local leaders," said Alan Tan, a law professor at the National University of Singapore and an expert on the transboundary haze law.

Indonesia has refused to publish detailed plantation concession maps despite a court ruling ordering it to do so, and it emerged earlier this year that companies found guilty of burning land in the years since 2009 had failed to pay hundreds of millions of dollars in fines.

In Malaysia, companies have suggested publishing the maps would contravene state secrets.

After he toured smouldering tracts of land in Sumatra last month, President Joko Widodo admitted his government had been "negligent" in preparing for this year’s dry season.

The authorities have identified 16 domestic and international companies - some Malaysian - and scores of individuals that it says were responsible for this year’s fires. Some plantations have been sealed off.

But the challenges of regional cooperation will be on show in Siem Reap again this week, as ASEAN holds its annual ministerial meeting on the haze.

Indonesia’s Environment Minister Siti Nurbaya Bakar has not attended since 2015, and last month Malaysia was responsible for the haze that had enveloped the country, despite ASEAN monitoring showing the vast majority of fire hotspots were in Indonesia itself.

She did not respond to multiple requests for comment on the meeting, the fires or Indonesia’s efforts to stop them.

A change in weather patterns and the arrival of rain has once again brought respite from the haze, removing some of the pressure on governments to enforce the law, and companies to take their sustainability commitments seriously.

"Everyone worries and cares about haze when it’s in their faces," Varkkey said. "But when the sky clears, the problem is out of sight and out of mind."

But as the vision of a haze-free ASEAN by 2020 recedes, there is no escaping the potential consequences of continued inaction on the health of both people and planet.

"If forests continue to be degraded or destroyed, human beings will no longer be able to enjoy the irreplaceable services that nature provides (and) which all of us depend on," WWF-Malaysia Conservation Director Henry Chan said in a statement.