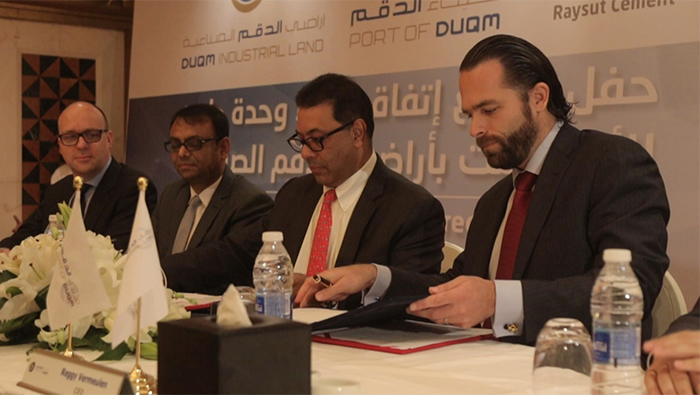 Muscat: A deal for a new grinding unit has been signed between Raysut Cement and Port of Duqm, which is another step in Raysut's aggressive expansion plans that aims to establish Oman in the international market, according to Raysut Cement Group CEO Joey Ghose.
Raysut Cement Company has signed a land lease agreement and 'port of terminal services’ agreement with Port of Duqm Company for building a new grinding unit in Duqm, Oman with an investment of $30 million.
The agreement was signed by Joey Ghose, Raysut Cement Company chief executive and Reggy Vermeulen, CEO of the Port of Duqm Company.
Raysut also plans to invest in India to the tune of $700 million by 2022 - for which the company eyeing taking over two existing cement plants at a cost of $200 million, according to a statement by the company.
Joey Ghose, the group CEO of Raysut Cement, said that the new deal was a part of Raysut's expansion strategy, which he sees as a way to cover Oman’s demand on a region-by-region basis.
“We at Raysut Cement embarked on an aggressive expansion strategy two years ago, looking at regional demand and supply. The cement competition in Oman is split between the north and south, and for that reason we, as Raysut Cement, took over Sohar Cement in May 2019. That added 1.7 million tonnes to our capacity, which reached a total of 6.4 million tonnes. That has covered our north market,” Ghose said.
“We are now looking at the Al Wusta Market, and so have signed the construction agreement to for a million tonne, energy efficient, green grinding unit. This grinding unit is good not only for Raysut, but also for locals who will take advantage of job opportunities and even businessmen who want to work with Raysut Cement,” he added.
According to him, “This grinding unit will provide significant employment opportunities in the Al Wusta governorate. It will provide more than 400 jobs, 250 of which are direct jobs, and more than 60 per cent of them will be for Omanis. The unit will also provide support services and allow local businesses and entrepreneurs to participate in the growth of the region.”
The group CEO said that this was only the start, as the company had ambitious plans in the future to achieve OMR230 as turnover by the year 2025.
“We believe that we want to become a 20 million tonne company by 2025, which only gives us five years. By this time, we also would like to become OMR230 million-turnover company by the year 2025.
"In line with this vision, we are taking steps and delivering on our promises. Taking over Sohar cement will add OMR35 million to our turnover. By building this grinding unit in Duqm, we will add OMR25 million to our turnover. This will bring our turnover to 200 million by the year 2022,” Ghose said.
The company has other expansion plans, which will take Oman into the global market. “Following that, we are expanding into East Africa and South Africa, and we hope to start exports to India very soon,” Ghose added.
“As a company, we are in the growth phase. We look at Oman becoming a regional player as a country, and we see Raysut as the company to take Oman international. That is our vision, and we are delivering it.”
Raysut’s revenues reportedly grew by 26.6 per cent last year.
A statement by Raysut Cement read: “The company had posted a growth of 26.6 per cent in revenues last year with turnover recorded at OMR91 million, a significant growth from OMR71.8 million in 2017. Following a $60 million acquisition of Sohar Cements earlier in the year, Raysut also announced a joint venture with MSG Group in East Africa to set up a $40 million cement grinding unit in Berbera, Somaliland.