Hurricane Dorian tears through the Bahamas 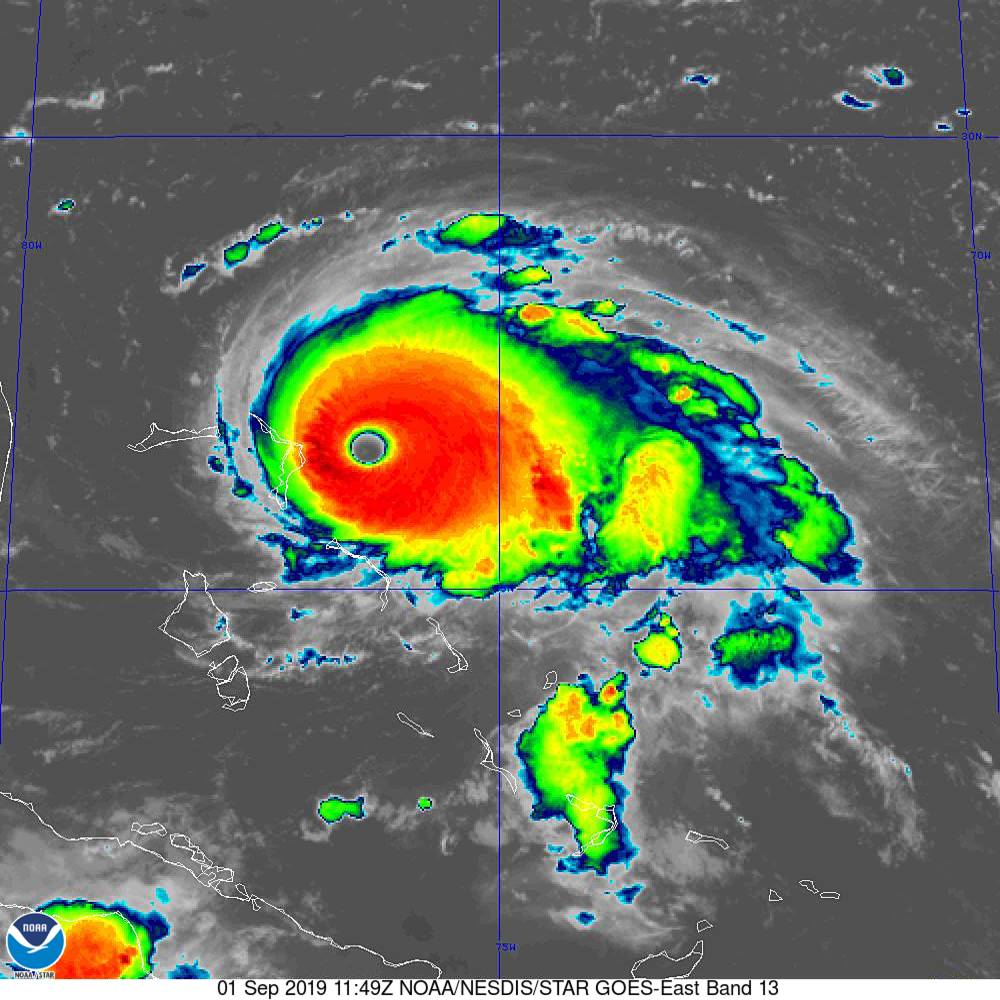 The storm's winds decreased slightly to 265 kilometres/per hour on Monday as its westward movement slowed, in what forecasters said would be a daylong assault. Earlier, Dorian churned over Abaco island with battering winds of 285 km/h.

The International Federation of Red Cross and Red Crescent Societies' called the storm's impact "catastrophic," and said that up to 13,000 houses may have been severely impacted.

The organisation also warned that extensive flooding on the island of Abaco was believed to have contaminated wells with saltwater.

Residents reported power outages, roofs ripped off of buildings and the destruction of docks as the eyewall of the storm passed directly over the island. The property damage was "devastating", said Joy Jibrily, director general of the Bahamas' ministry of tourism and aviation.

The storm made its second landfall on the Great Abaco Island at 2pm (local time).

Officials ordered residents to evacuate both areas, making several last-minute pleas as the storm made landfall.

"We cannot stress the amount of devastation and catastrophic impact that Hurricane Dorian is expected to bring," Shavonne Moxey-Bonamy, the chief meteorologist of Bahamas, said.

According to Latrae Rahming, press secretary for former Bahamas PM's office, "this storm could linger around until Tuesday evening, 4pm", leading to an extended period of massive waves, flooding, power outages and rain.

The storm could cause sea levels to rise up to six metres and winds might reach a speed of 340km/h, according to the NHC.

"We are hearing reports of entire destruction of homes ... severe flooding, and key economic parts of the island are gone," Rahming said.

"The major concern right now is to save and preserve lives," he added.

"These hazards will cause extreme destruction in the affected areas and will continue for several hours," the NHC said.

Many northern Bahamas residents hunkered down in schools, churches and other shelters as the storm approached.

But despite the orders to evacuate, officials said several residents had chosen to stay home to ride out the storm.

Silbert Mills, the 59-year-old owner of the Bahamas Christian Network, a local broadcasting company, said that he plans to ride out the storm on the Abaco Islands, where he said trees and power lines were already down and some roads had become impassable.

"The winds are howling like we've never, ever experienced before," Mills said.

In the northern stretches of the Bahamas archipelago, hotels closed, residents boarded up homes and officials hired boats to move people from low-lying areas to bigger islands as the hurricane approached.

Bahamas Prime Minister Hubert Minnis warned that Dorian is a "dangerous storm" and said those "who do not evacuate are placing themselves in extreme danger and can expect a catastrophic consequence".

"The Royal Bahamas Defence Force began a process of going door by door, ordering persons in the affected area to move, some persons listened, some didn't..

On Saturday, small skiffs shuttled residents from the outlying fishing communities to McLean's Town, a settlement of a few dozen homes at the eastern end of Grand Bahama.

Most people came from Sweeting Cay, a fishing town of a few hundred people about 1.5 metres above sea level.

"We're not taking no chances," Margaret Bassett, a ferry operator for the Deep Water Cay resort, said. "They said evacuate, you have to evacuate."

On Sunday, several officials made last-minute appeals to those who had stayed behind.

"Please, please heed the warning," said Kwasi Thompson, minister of state for Grand Bahama. "We have no more time available."

Among those refusing to leave were 32 people in Sweetings Cay and a group that sought safety in Old Bahama Bay resort, according to reports.

Rainfall estimates for the northwestern Bahamas were upped to 30-60cm as the hurricane approached, with isolated incidents of up to 76cm expected to dump down in some areas.

Authorities had closed airports for the Abaco Islands, Grand Bahama and Bimini islands, but Lynden Pindling International Airport in the capital of Nassau remained open on Sunday.

The slow-crawling storm was predicted to take until Monday afternoon to pass over the Bahamas, and then turn sharply and skirt up the US coast, staying just off Florida and Georgia on Tuesday and Wednesday and then buffeting South Carolina and North Carolina on Thursday.

But the slow approach complicates the outlook for the US, National Hurricane Center Director Ken Graham told reporters, as the increased time allows small changes in the winds that steer the storm.

This means Dorian can still make landfall anywhere from Florida to North Carolina during the next five days, he said.

Earlier in the week, US President Donald Trump, who cancelled a high-profile trip to Poland to focus on storm preparations, declared a federal state of emergency in Florida, authorising US assistance to supplement state and local efforts.

On Sunday, South Carolina Governor Henry McMaster has ordered a mandatory evacuation of his state's entire coast as Hurricane Dorian moves closer to the US.