Oman weather: Call to save workers’ lives this summer 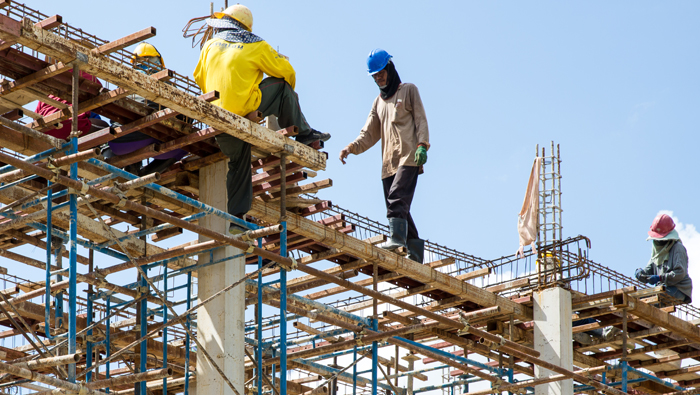 Muscat: As temperatures rise, Oman is bracing itself for a spike in work-related injuries due to the sweltering heat, leading health and safety experts call on employers to strictly follow official safety guidelines this year to save lives and prevent casualties.
Get your essential daily briefing delivered direct to your email inbox with our e-newsletter
An official at the Public Authority for Civil Defence and Ambulance (PACDA) said most work injuries are reported during summer, especially cases of workers falling off high floors at construction sites or having their fingers cut due to unsafe use of drilling equipment.
According to the latest figures, the number of people who died in workplace incidents in Oman increased by 60 per cent in the last couple of years.
Of the 3,163 death pension cases recorded by the Public Authority for Social Insurance (PASI) in 2015, 386 cases were of people who had died at the workplace, compared to 521 in 2014.
“Since some workers are exposed to direct sunlight, they might suffer a sunstroke while being in a dangerous location, which can eventually lead to death,” the PACDA official said.
Stay ahead of the rest and download our free WhatsNews app for Apple, Android or Blackberry
According to the ministerial decision 286/2008, workers must not work at construction sites or open areas of high temperature at noon, particularly between 12:30 pm and 3:30 pm throughout the months of June, July and August every year.
Heatstroke occurs as a result of direct exposure to severe hot air, especially direct sun rays, in the summer.
It causes an imbalance in the sensitive brain centres, and especially harms the heat regulation centre which keeps temperature normal.
It occurs more in children, the elderly, patients with heart disease, diabetes, alcohol and drug addicts and those not familiar with high temperature atmosphere.
“Cases of fire at under construction sites are not very common as there are no electricity cables yet installed in these properties,” the PACDA official said.
To tackle the issue, the Oman National Engineering & Investment Company (ONEIC) has launched a Heat Stress Campaign to raise awareness about dangers of working under direct sunlight.
The Heat Stress Campaign has reached around 7,000 labourers in Oman, including areas outside the capital Muscat, according to Sultan Ahmed Al Hinai, health and safety manager at ONEIC.
Sun strokes
He stated that the number of injuries and deaths around the world due to direct sun strokes is estimated annually at more than 8,000.
These happen in case of people who work in countries where temperature reaches above 40 degrees in the months of June, July and August.
Al Hinai was talking to the Times of Oman on the sidelines of the Occupational Safety and Health exhibition which kicked off on Sunday at the Avenues Mall in Muscat.
He added that the campaign, in its second year, aims at raising awareness about the risks resulting from direct sun strikes while working in open spaces, by visiting a number of construction sites in the Sultanate.
“Volunteers also distribute leaflets in Hindi, Urdu, Arabic and English languages,” Al Hinai said, adding that workers are also informed about the importance of drinking hydrating fluids which provide the body with more minerals and salts than normal water.
The heat stress campaign was sponsored by the Ministry of Manpower represented by the Occupational Safety and Health Department and the Management of ONEIC (SAOG), with the participation of ABB International Company and Majis Industrial Services.