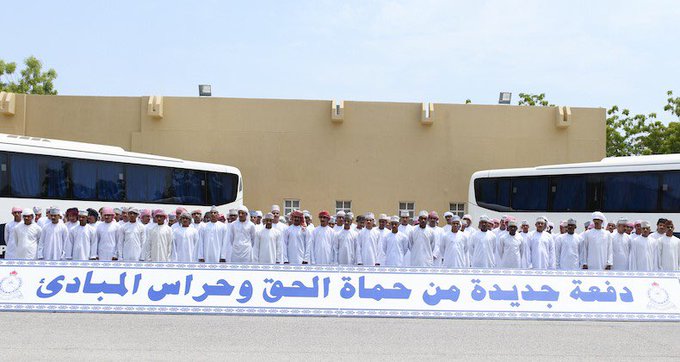 Muscat: A new group of recruits has arrived to the Sultan Qaboos Academy for Police Sciences to be trained to become officers of the law, according to the Royal Oman Police.

A statement by the ROP read: “The Sultan Qaboos Academy for Police Sciences has welcomed on Sunday, August 18, a new group of enlisting citizens who have gained a high school diploma after they passed the tests and medical checks necessary.”

The school graduates will study to become part of the Royal Oman Police and help protect Oman, but ROP officials have also said that citizens are hired to help provide jobs to Omanis and lower unemployment.

Captain Abdulaziz Al Farsi of the Directorate of Employment at the ROP said: “As part of the Royal Oman Police’s efforts to absorb Omani jobseekers the ROP accepts a new batch of citizens who have passed all of their assessments, whether they are physical fitness tests or personal interviews, as well as tests related to IT skills, writing tests, and medical checks.

“This is in preparation for sending this group to the Sultan Qaboos Academy for Police Sciences to gain military, legal, and fitness skills necessary so that they can join their brethren at the ROP,” he added.

The statement from the ROP added: “Hiring this new group of the protectors of righteousness and the guards of principles comes within the framework of the constant ROP procedures to hire Omani citizens according to the approved plan of the police headquarters.”

Citizens who were accepted into the academy were proud to have been accepted and said that they hoped to be of service to Oman and its people.

Saud Al Balushi, who had just enlisted, said: “Thank god, I am very happy to join the ROP. I and my colleagues will work hard in serving the country and the people of Oman.”

Mohammed Al Shahri, another recruit, added, “I am extremely pleased that this happened. The others and I will spare no effort and do our best.”