Quite happy with the way I've bowled: Krunal Pandya 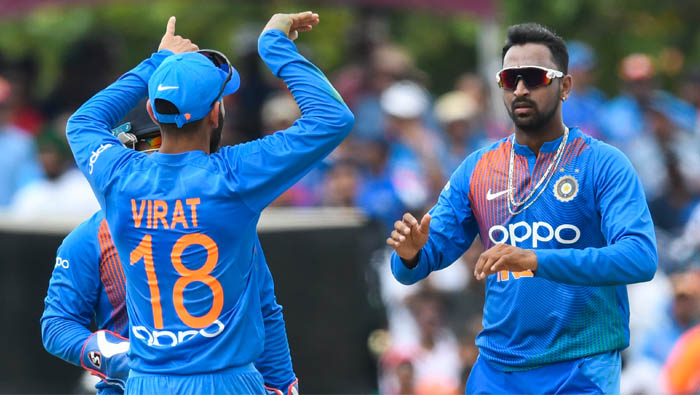 Florida: Krunal Pandya contributed with both bat and ball in India's series-sealing victory over West Indies in the second Twenty20 International in Lauderhill, Florida, and said he was particularly pleased with the way he bowled. Pandya bowled a disciplined spell in first T20I, in tandem with fellow left-arm spinner Ravindra Jadeja, and finished with 1/20. On Sunday, he raised his game, scoring a quickfire 20* before picking two crucial wickets to end with 2/23 in 3.3 overs. The effort pleased him, given it came on a pitch that had something in it for the spinners. "l am quite happy the way I have bowled," Pandya said. "(In) the first game I bowled four overs and in this (second) game I bowled three overs. The wicket was slightly helping the spinners. It was a good confidence booster when you represent your country. It was a great experience playing in the USA." On Sunday, Pandya hit two sixes in the last over of India's innings, helping his side to a par total of 167/5. The new-ball pair of Washington Sundar, the off-spinner, and paceman Bhuvneshwar Kumar then reduced West Indies to 8/2 in the third over, before a 76-run stand between Nicholas Pooran and Rovman Powell helped West Indies claw their way back into the game. Pandya then removed the two set batsmen, as India finished 22 ahead of West Indies on the DLS par score. "It is important that your fast bowlers pick early wickets as it makes our job quite easier," he said. "If they are two or three down, we can come and bowl to the middle order. Washington bowled well in both games. Bhuvi is a world-class bowler, everyone knows about it. It is good that everyone has contributed, whether it is bowling or batting. Overall, it's a good team performance." Pandya has been a regular feature in India's T20I side since he made his debut in the home series against West Indies in November 2018. He has come a long way in a short time, and said the enjoyment he derives from the game is still the same as it was when he was a child. "You should never give up, and you should love what you are doing," said Pandya. "Still, the mindset is the same as when I was six, and started playing cricket because I used to love the game. Love the game and rest will fall in its place."