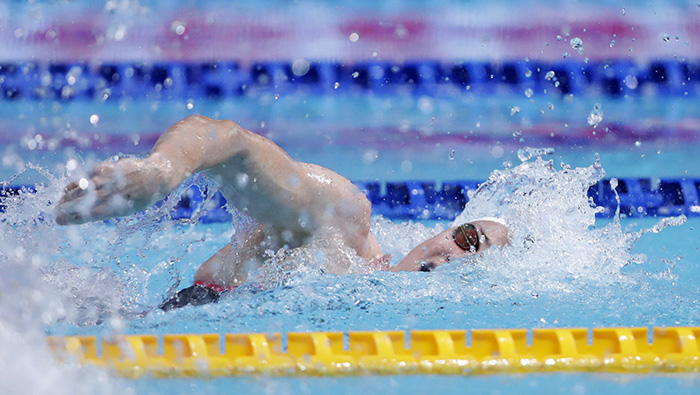 Tokyo: The 2019 FINA Swimming World Cup ended here on Sunday with Japan winning the mixed 4x100m medley relay among the 12 final events held on the last day of competition.

The event started on Friday, marking the first stop of the 2019 FINA season. In the mixed 4x100m medley relay, Japan won in 3:44.75, breaking the FINA World Cup record of 3:46.10, while Australia and Belarus came second and third respectively.

The women's 800m freestyle final saw Kiah Melverton of Australia win gold in 8:22.24, which lowered the FINA World Cup record of 8:24.76. She was followed by Mireia Belmonte of Spain and Yukimi Moriyama of Japan.

Daiya Seto of Japan topped the men's 400m individual medley with 4:11.41, lowering the FINA World Cup record of 4:13.44, while 23.10 was enough for Andrii Govorov of Ukraine to emerge victorious in the men's 50m butterfly.

There was also fierce competition in the finals of women's 100m butterfly and women's 100m Freestyle. Louise Hansson of Sweden took the butterfly in 57.92 and Cate Campbell of Australia won the freestyle in 52.64, smashing her own FINA World Cup record of 52.96.

The finals of the men's 100m backstroke, 200m breaststroke and 200m freestyle also took place on the final day of the competition. Mitchell Larkin of Australia finished in 53.76 to win the backstroke, while Andrew Wilson of the United States took the gold medal in the breaststroke, winning in 2:07.77. Danas Rapsys won the freestyle in 1:45.74, breaking the FINA World Cup record of 1:46.50.

The 2019 FINA Swimming World Cup in Tokyo included 34 events: 16 per gender and two mixed relays. The tournament served as a qualifying event for the 2020 Tokyo Olympic Games.