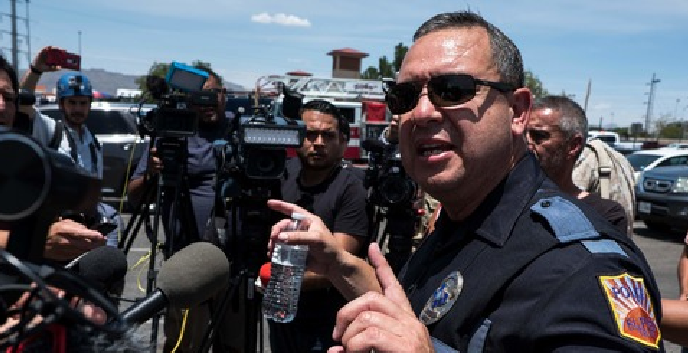 Houston: At least 20 people were killed and 26 others were wounded on Saturday in a mass shoting El Paso, Texas.

El Paso Police chief Greg Allen said that the attack has a "nexus to a hate crime" based on a four-page manifesto found and that was posted a few minutes before the shooting.

El Paso Police Sergeant Robert Gomez said during a press conference that the suspect, identified as a 21-year-old male, was taken into custody at a Walmart "without incident" and that "no law enforcement personnel fired their weapons".

According to reports, the FBI has opened a 'domestic terrorism investigation' into the shooting.

The Governor of Texas Greg Abbott said that the shooting was "one of the most deadly days in the history of Texas.

He added in a statement that the state of Texas "will do everything it can to ensure justice is delivered to the perpetrators of this heinous crime."

President Donald Trump tweeted that the shooting in El Paso "was not only tragic, it was an act of cowardice.I know that I stand with everyone in this Country to condemn today's hateful act. There are no reasons or excuses that will ever justify killing innocent people."

The White House added in a statement, "The President continues to receive updates from his national security team on the tragic shootings in El Paso.

"The President has pledged the full support of the Federal Government to Governor Abbott," it added.

US Attorney General William Barr also said in a statement, "The Justice Department joins in mourning with the people of El Paso, Texas. Those who commit such atrocities should eb held accountable swiftly and to the fullest extent the law allows."