Duterte appeals to Congress to help the poor 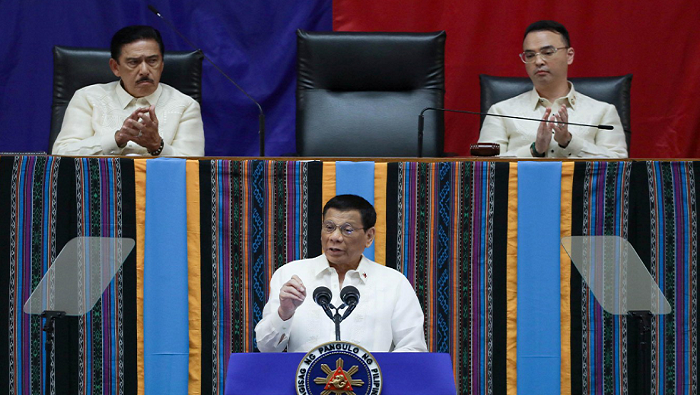 Manila: President Rodrigo Duterte has appealed to the Congress of the Philippines to pass measures that will help government lift six million Filipinos out poverty, state media reported.

However, the government’s challenge now is to lift some 6 million poor Filipinos out of poverty by the end of his term in 2022.

“The most important number, though, is the 6 million Filipinos we need to pull out from poverty. Kindly help me on this,” Duterte told congress in his fourth State of the Nation Address (SONA).

While the government has pursued tax reforms to fund its poverty reduction programs, he asked congress to also pass the remaining packages of the tax reform program.

“I, therefore, implore congress to immediately pass Package 2 of the Comprehensive Tax Reform Program, or the Trabaho bill, which shall gradually lower the income -- corporate income tax, and rationalise and improve fiscal incentives,” Duterte said.

Duterte said the Trabaho bill would energise micro, small, and medium enterprises (MSMEs), encourage them to expand their business to generate 1.4 million jobs in the coming years

Duterte also asked congress to approve a new version of the Salary Standardization Law to include teachers.

He also urged congress to review and pass the Government Rightsizing Bill to reconfigure the existing Metro Manila-centric bureaucracy; streamline government systems in order to deliver services without delay and within a short timeline.

Meanwhile, he encouraged them to hasten the establishment of a Department of Disaster Resilience (DDR) to focus on the natural hazards and climate change, which he described as “poverty creators.”

On April 12, Duterte signed into law the Magna Carta of the Poor (RA 11291), which is meant to uplift the standard of living and quality of life of impoverished Filipinos.

Duterte acknowledged that corruption still exists in the government and encouraged congress to investigate departments or officials involved in the practice and send them to jail.

”As I said, corruption is everywhere. You are free to investigate. I don't take offence. If there is anything wrong in my department, the Executive, you are free to open the investigation anytime,” Duterte said.

“You do not have to call me. Call the idiots, expose them, and send them to jail. You are helping me," he added.

"I've been a prosecutor. I know how it works. Feel free. Feel free to expose anything that is not in accordance with law," he said.